This is my unit 1 part D arts issue for my gold arts award.

Is graffiti vandalism or art?

It has always been a burning question whether graffiti is vandalism or art, in my opinion graffiti is 100% art, but others may think differently. Graffiti in most countries is considered a crime; however some pieces can hold high artistic qualities and deep meanings. It's just a case of determining where the fine line stands in the decision of vandalism or art. In this argument I will be presenting my own opinion, comparing opinions and facts from my research and coming to a conclusion about how my research has changed my own personal opinion on whether graffiti is vandalism or art.

Many people in the world, just like me, believe graffiti to be an art form for many particular reasons. Is it the excitement of a splash of colour added to the walls? Is it because the 'pieces' focus on taboo issues? Personally this is why I believe it is art. Maybe so do others, however one person who shares his opinion on the subject, George C Stowers an American writer, has something else to say about it all. George wrote in his book 'An essay concerning the recognition of some forms of graffiti as art' that graffiti simply has to be considered an art form. He says more complicated pieces of graffiti require planning and imagination and contain artistic elements like colour and composition. This is a point I totally agree with. He notices the difference between simple tags and bigger projects stating that 'they have little aesthetic appeal and should not be considered art' Tagging is a certain type of graffiti that uses a single word or series of symbols to mark a territory. All in all George claims to believe that graffiti is art as long as it's not a random tag on any old wall that has no meaning. This taught me that people do believe it is art, but it depends what type of graffiti it is.

In the world there is always going to be somebody with a different opinion, someone or even a group of people who do not agree with everyone else. Unfortunately in this case there are many people who feel as if graffiti is in its whole entirety is not art what so ever. I managed to find various debates online asking people about this topic and even answered to some myself. In one debate I found on debate.Org where they were asking if they believed graffiti was vandalism. 84% answered yes and 16% answered no, meaning the majority of people who believed graffiti is vandalism. I also looked at a poll from expressandstar.com asking Is graffiti a form of art? 53.95% of people said no and 46.05% said yes therefore again more people think that graffiti is not a form of art. This shocked me I really believed more people would consider it an art form, after all it's just as creative and beautiful as it would be if it was on a piece of paper, right? Or this is what I thought until saw a particular comment. 'Even if your Picasso graffitying on somebody else's land it is not art and you should not be able to do it! It's a waste of space and destroys beautiful buildings and landscapes! Sure it looks nice, but it's ruining beautiful places by pointless drawings! It's not art at all!' This made me rethink my opinion on a whole. It made me realise that sometimes graffiti does obviously ruin places for people who believe them to be beautiful and that it effects people in different ways. However I then also thought isn't that what art is supposed to do? Affect people and get them talking, have an impact whether it be good or bad.

Graffiti is not just done on random walls in random areas, but is also done on people's homes. This is something that the home owner would have to spend time cleaning off, all because someone decided to 'deface' their property. An article I found made me think about how I would feel if my home was tagged in the middle of the night without my consent. They asked the readers would they admire the new addition or immediately call the police. I'd certainly call the police and this taught me that people really do get bothered about this issue, because sometimes it can make an area look rough and this is something most members of the public don't want to be associated with.

What if graffiti was both of these things? Not one or the other but both vandalism and art. I was very interested with individual's opinions on whether graffiti was vandalism or art and was quite puzzled on how my mind-set was changing throughout my research. I started thinking if graffiti is vandalism then how come some graffiti artists have become everyday household names. For example Banksy an anonymous England-based graffiti artist, who was named one of the 100 most influential people in 2010. His spray paint images are illegal, but still create newspaper headlines and sell for hundreds of thousands in galleries all around the globe. His work is considered art, however if a teenager spray painted on a random wall even to possibly Banksy's standard he/she would be labled as a criminal and punished for their actions. Other than Banksy there are many graffiti artists who work legally to create murals and paintings for other people in their homes. This is something I've always wanted, a graffiti mural in my bedroom, because I think it would look really cool and id already been researching artists that could do this for me. I emailed a team called graffiti life asking them so questions on my arts issue. They told me that graffiti is most defiantly vandalism, because it is illegal, however it is still allowed to be art. They suggested to me that what makes something art is an individual's opinions. I agreed entirely with this statement, because if I looked at a tag I'd say 'that's not art' but if there was a piece with deep meaning then to me that's art. However they shared their opinion and said 'if anyone can appreciate the beauty in a piece of 'vandalism', anything from a full painting to a graffiti tag then I would argue that it would have to be categorised as art' this opened my eyes to believe that truly anything is art if it has a meaning to you.

Throughout the research for this issue my opinion has been on a rollercoaster ride, but I've defiantly come to a conclusion and an answer for the question is graffiti vandalism or art? It's simply both in my overall opinion graffiti is vandalism, because it's illegal unless you have permission which 9 times out of 10 people don't. However it is also most defiantly art, because of the uses of artistic element and the issues the paintings try and battle, however I still believe that tagging isn't, however It's all down to how individual people view art.

I am a student from Herne Bay High School and i'm doing my gold arts award. 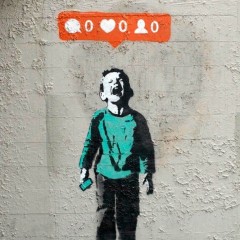 Is graffiti vandalism or art?

This is my unit 1 part D arts issue for my gold arts award.