My argument on the legality of paparazzi.

Firstly, not all paparazzi will be like the extreme cases reported on in the media and generalising them all gives them an unfair reputation. It could also be argued that a celebrity has chosen this life and having their photographs taken by paparazzi comes along with this.

This is someone’s job who needs an income and some of the time the only way for them to achieve this is too have an original picture. This can be why some go to such extremes to get the best picture possible as it would guarantee a reward. If they took a picture yet another photographer got one closer up the newspaper/magazine is more likely to chose the closer up version. It is important not to forget that some will have families to provide for too which gives an even bigger incentive to go to extremes and possibly bend the rules.

I argue that paparazzi can also be no different from fans of celebrities who crowd around taking pictures. Both might come too close and invade the privacy of the celebrities however one just makes money from it. If one party has laws against how close they can approach surely these should apply to everybody.

Paparazzi pursuing celebrities can however be very dangerous and intrusive.Princess Diana is an example of a victim of paparazzi when she died from the fatal injuries of a car crash on 31st August 1997 in France after a car chase with some paparazzi following her. She was a member of the Royal Family through marrying Prince Charles and with him she had two children, Prince William and Prince Harry.

“The princess' Mercedes car was apparently being pursued at high speed by photographers on motorbikes when it hit a pillar and smashed into a wall. Mr Al Fayed and the chauffeur died at the scene but the princess and her bodyguard were cut from the wreckage and rushed to hospital.” – BBC News

Diana later died in hospital at 03:00 BST after having suffered a cardiac arrest. The driver of the car was over the limit and was speeding.  This makes it hard to solely blame the paparazzi however the speeding would have been so he could avoid the paparazzi on motorbikes so I argue that without them pursuing her she would still be alive today.

The only survivor of the crash Trevor Rees-Jones suffered a serious head injury and entered a coma for 10 days so is unable to recall the moments leading up to her death which could have potentially shed some light onto the situation. He did however publish his book “The Bodyguard's Story: Diana, the Crash, and the Sole Survivor” in March 2000.

After Diana’s death there were changes as it shocked the world into realising what the problem with paparazzi was. Mainly attitudes changed which was a big step however a law was added too:

“i) Journalists must not engage in intimidation, harassment or persistent pursuit.

ii) They must not persist in questioning, telephoning, pursuing or photographing individuals once asked to desist; nor remain on their property when asked to leave and must not follow them. If requested, they must identify themselves and whom they represent.”

Other victims have included Lindsay Lohan who also crashed her car whilst being followed by photographers, 2005. Will Smith had a reporter try and kiss him, 2012. And lastly a photographer himself was run over by Justin Bieber after hounding him by his car, 2017.

My opinion on the matter is that there should be more regulations set in place because in the process of paparazzi perusing celebrities people do get hurt. Princess Diana was an extreme example but it is still important not to forget what happened so we can prevent further serious incidents like these. I also believe more actions should be taken if rules are not followed as it is for the safety of many that they exist. I do understand that this is somebody’s job however the extreme lengths that are sometimes sought can be dangerous and unfair to the celebrities involved. 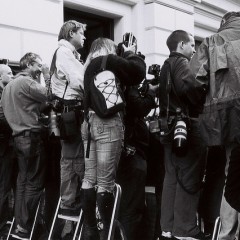 The Legality of Paparazzi

My argument on the legality of paparazzi.