Fresh from graduating from her MA course at The Royal Central School of Speech and Drama in December 2017, writer Nicole Acquah used the above statement as a premise for her latest piece.

‘For a Black Girl’ makes its London VAULT Festival debut on the 24th-28th January 2018 and is set to really get audiences talking. Acquah will be collaborating with This Is It Theatre and I’m greatly excited to see how the piece fits together. Only six actors, two chairs and one hamburger will be used to convey the stories of over sixty characters. How challenging indeed!

The piece will amalgamate different spoken word, interviews and movement sequences together to truly reflect real-life stories of BAME citizens within the UK today. Therefore, it can be assured that the different media elements will allow the subject matter to be accessible to all. Due to the prestigious drama school that the majority of the company have attended; audiences will have the opportunity to leave the theatre really feeling and questioning their life.

Do racism and sexism still exist? Do they exist as one infused tea, a tea where the public are hesitant to allow it to spread through water? Well, Harvey Weinstein has clearly proven that sexism is still strong in the arts world. What we’re witnessing today is a far-reaching and arguably pivotal point in the history of women’s rights. A voice is being given to those who have felt extremely voiceless, with women coming together to take courage and supporting those who have suffered for so long.

With the Equal Pay Act of 2010 in existence, alongside the rising influence of diversity on society- does the patriarchy still hold all such a momentous stretch of power? Power couple Beyoncé and Jay-Z are the first billion dollar self-made couple, with Jay-Z earning amassing more ($810m to her $350m fortune). Both are diverse acts. Both are incredibly hard workers. Yes, it could be argued that as Beyonce has earnt less, the man still retain dominance. Or, it could be viewed that Beyoncé could retire to motherhood. I’m unsure if this is likely, considering how her sold-out ‘Lemonade’ tour kept her extremely busy in 2016. She did not fray away from her busy job duties for looking after her children.

I’m unsure of where I stand on the matter. Therefore, I think it’s fitting to see where This Is It Theatre positions itself later this month at the VAULT Festival. I’d also like to hear about one man’s story of going bra-less.

For more information and to purchase tickets, please click here. 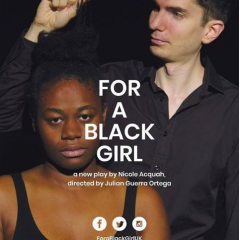