We run through the best of television over the last 12 months!

2017, if nothing else, has certainly given us an abundance of great TV. Across all genres, there has been no shortage of binge-worthy shows. Compiling a list of the best has consequently proved difficult so after much deliberation, here is an overview of the most standout shows from the year.

The sequel of this seminal Netflix original shook up the internet just as much as the original season. The production was intensified in all respects; plot, cinematography, and acting alike. The introduction of new characters, and unexpected developments of old favourites, is sure to induce a huge emotional connection in audiences of all ages. The inclusion of far more sinister undertones proved for a more sophisticated season, but without losing any of the nostalgic charm that originally earned the show its stripes.

Narcos is undoubtedly another of Netflix’s greatest successes – a (somewhat political) thriller based on the drugs rings of Colombia, inspired by true stories. The third season, however, pulls a complete 180 following the death of a protagonist, and relocates entirely to Cali. While an abundance of new faces take the screen, they integrate impressively smoothly, quashing expectation of a jumpy reboot. As ever, it takes a few episodes to get to the core of the plot, but once reached, it’s engaging enough to be worth it.

From the very first season, this cybercrime based drama has been a constant example of how to do this genre right. Unpredictable, original and slightly standoffish, it has kept audiences hooked and fascinated with its dark tone, fast pace, and directorial creativity. Season 3 has been no exception, continuing to play to its strengths and ramping up the intensity through the exploration of darker themes to create gripping television.

The Handmaid’s Tale is, to summarise, a downright menacing drama following the concept of a totalitarian regime, wherein women are essentially property of the state. Considering the novel it is based on was released in 1985, many of the themes are still chillingly thought-provoking and relevant to today’s society. The resonance from this show is far from temporary.

The basic premise of Riverdale is that it’s a classic teen high school drama, but with incredibly high quality execution. Whilst the first season proved an instant classic with viewers, the second brings a new dimension following a development in the ‘murder mystery’ structure of the show. Darker themes continue to be explored, character arcs are heightened, and the season deserves far more credit than it’s given – it certainly isn’t just another formulaic teen drama.

Rick and Morty earned cult status with its earlier seasons, hailed by critics as a satirical adult cartoon with intellectual, existentialist undertones. The third season was considered to have fallen short of the (sky-high) bar set by its predecessors, but was nevertheless received with large applause. While sticking to its winning formula of bad science puns and dangerously edgy one-liners, it allows for the exploration of a more emotional side of each character. This, of course, elicits a more personal connection from the audience which undoubtedly will be preyed on in the next season.

People Just Do Nothing S4 (BBC)

A perfect summary of classic British comedy: a mockumentary structure, lacklustre setting, unexceptional subject matter and humour that simultaneously evokes both strong cringing and pity. The show follows a group of lads messing around at Kurupt FM, a UK Garage pirate radio station, deluded into thinking themselves genii. The key to the success of this show is that everyone is unlikeable, even after their developments in the season. It relies on each character’s shortcomings, flaws, and awkward misgivings. With British comedy being what it is, the show works a treat.

While Broadchurch might not be regarded as highly as other BBC classics, it certainly deserves equal, if not higher, credit. The first two seasons focused on a murder case, and this third focuses on a chillingly feasible rape case set in the same town. What makes the show so ultimately harrowing is the intensity of performance brought by the main trio; David Tennant, Olivia Colman, and Julie Hesmondhalgh. A cold psychological drama, with conversely warm characters, and reckless twists throughout, this show will draw your breath, move you to tears, and won’t leave your mind for months.

One of Netflix’s most famous originals, this thriller-comedy-prison-drama has gone from strength to strength in every new instalment. The storyline followed this time, admittedly, is somewhat farfetched but still the right side of the ‘believable’ line. The diversity of the cast, and the detailed backstory behind each character means that everyone can feel an affinity with this show – although being a woman would certainly help. This season marks a hugely significant shift in the overarching power dynamic between ‘person vs institution’, which will be fascinating to see develop in the next season.

Yet another Netflix original, Bojack Horseman is a satirical cartoon depicting life in show business, hailed for its blunt, dark, portrayal of themes such as mental health and politics. After the third season, the previously magic formula seemed to be stagnating – the dark humour had became a little heavy, and aimless. However, the fourth season managed to bring life back to the story. Veering towards a focus on family, growth and change, the balance was restored by playing on empathy, and once again garnered high praise from critics, and safely recovered the investment of the audience. 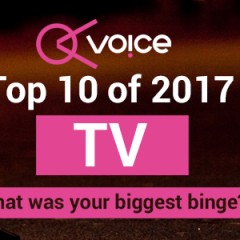 We run through the best of television over the last 12 months!