When I sat in school learning about the Suffragists and the Suffragettes, I was taught that women had fought to be heard, to earn the right to vote, and to have more control over their lives.

I thought it was a fight for equality among the sexes; a struggle for everyone to receive the same social, political and economic opportunities and responsibilities. With this in mind, I was proud to call myself a feminist.

Moving to a university that was particularly proud of it's feminist activism and heritage, I was suddenly surrounded by a divide of people. Those that called themselves "feminists" and those who groaned at the mention of the term. Some express what seem to be very logical and fair opinions but in such a negative way that others refused to remain in the conversation. As more of these "aggressive" feminists expressed their opinion, the opposite of what they wanted appeared to happen. Instead of starting a dialogue, they alienated people until the conversation went dead.

I believe this reaction is because the campaign of feminism and equality is being usurped by a vocal minority who seek to not only to bring women to the same level as men in society but go further and position women as the dominant sex. This change to the goal is beginning to cause a pushback. However, it is not affecting the aggressors alone but the cause as a whole.

No matter the divide of opinions as a whole, with one shared aim we should do our best to provide women with the greater opportunities that they deserve. This is no way means we should take from what the male gender has already achieved, but simply allow everyone equal responsibilities by bringing them all to the same level. By allowing everyone to rise up, surely this will only be an improvement on our society and allow the historical sexist behaviour of the past to disappear from our day to day lives, providing a more equal atmosphere for our future generations.

Suffragists in history protested for what they believed in by trying to talk about it, begin a conversation and make their points heard peacefully. Suffragettes approached the fight from a slightly different angle; starvation, suicide etc. Despite their drastically different approaches, they both sought the same goal; gender equality.

Nowadays, in what many are referring to as the third wave of feminism, we seem to be split once more over how we want to bring our issues to light. Though we share the same goal, we are divided in our approach. Like the Suffragettes and the Suffragists, instead of working together, we fight to be the side that is heard. The equalists say one thing, the feminists another, yet the majority are trying to illustrate the same point.

Why is it that on the scales of equality we seem to be unable to find a balance and instead push from one extreme to another? Violence towards women is rightly spoken about daily. However, men suffer too. Men make more in the same position as women. How is it fair that a woman being beaten is awful but a man being beaten makes him weak? We are all human, we should be treated on the same level, regardless of gender, race, sexuality, religion, opinion etc. Violence of any kind is abhorrent, regardless of victim - this shouldn't need saying in 2017.

Many see the argument of feminism changing from equality to superiority. Why? Have you ever been on a night out and witnessed a couple arguing over who will pay the bill? Some would argue that there is an expectation for the man to pay to demonstrate their chivalry. Some would argue that the bill should be split evenly because everyone pays their own way. Others believe that the one who extended the invitation should pay. Finally, those who wish to turn the idea of chivalry upside down would argue the woman should pay, because she can. Tradition, or how people were raised seems to constantly butt heads with certain branches of feminism. The offer to pay may not have been made with the implication that the other could not and was extended as a politeness? But is it a display of feminism to refuse and argue, or is it rude?

Perhaps it is not the term that has changed but the meaning has splintered and now falls under several definitions. It is not what people are saying, but the way people are hearing. For example, when Michelle Obama said:

"Every mother works hard, and every woman deserves to be respected."

She wasn't saying that fathers do not work hard and every man doesn't deserve respect, she was simply addressing those who may not believe that both parties should be treated equally. But it is those who choose to twist our words through social media and misinformed reporting that creates a divide, rather than a message of equality and inclusion.

Maybe the definitions are becoming more of a fight than the issues themselves. The labels are taking away from who we really are and is the underlying reason we fight. We are all human, we all deserve the same treatment regardless. Remove the labels and fight for everyone to have the same opportunities and the same responsibilities. Considering the recent political changes and horrible events taking place right now across the world as you read this, we can only imagine it's going to get worse. We need each other, we need to work together against those who only want to pull us down, united and equal. 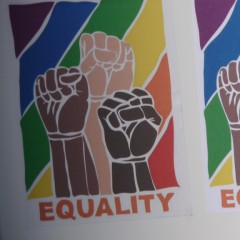 Feminism: a fight for equality or a struggle for superiority?

When I sat in school learning about the Suffragists and the Suffragettes, I was taught that women had fought to be heard, to earn the right to vote, and to have more control over their lives.