Free coffee in hand, I wander down to City Screen's basement. Late as ever, I arrive to the scene of a small table of panelists enthusiastically discussing the creativity that new streaming services are encouraging. From this, the conversation jumps from the emergence of data driven commissions to the uncertain future of virtual reality. Host Jonathan Hook and panelists Tak Kuroha, Inti Carboni and Jessica Bishopp all offer insightful comments on the new role that filmmakers play in the industry, predominantly arguing that these new platforms are less intimidating and more inspiring.

With the attention span of audiences getting increasingly shorter, streaming services are successfully accommodating for this (as well as contributing to it) by providing the widest range of programmes and films as possible. Traditional media is a linear model that relies on advertisement and a large number of concurrent views.This results in quite homogeneous content. Netflix and Amazon Prime, on the other hand operate on a subscription based service. This diversity in content is a successful model, as they attract viewers based on appealing to the largest network possible.

As the coffee begins to filter through the room, discussion delves deeper, as a cynicism arises surrounding data driven commissions. For any production company, supporting a new programme is a risk, involving more money than most of us will ever see in our lifetimes. Therefore the system is more likely to commission shows, actors or genres that have proven successful with audiences in the past. As panelist Jessica Bishopp argues, this tramples on the hopes of random successes emerging, such as recent female driven TV shows Fleabag and Girls. Before 2012 female led content in particular was not common, having rarely been given an opportunity to prove their financial success in the first place.

The panel unanimously agrees that data driven commissions are becoming more widespread, because let's face it, film and TV are big money makers. Optimistically, filmmaker Kuroha suggests this presents a further exciting challenge for creatives to wade through, but Inti Carboni plays devil's advocate, demonstrating that this method has always been in existence, so it's a task filmmakers have always had to battle. Simply look to the stereotypical boardroom of any production company, Carboni argues, (think straight suits and moustached men) and in the face of this intimidating, testosterone fueled room, as a filmmaker you must convince them that your ideas are their ideas.

As 45 minutes pass on the clock, the coffee begins to get cold as the idea that virtual reality is a sinking ship is tentatively passed round the space. Virtual reality is still in its infancy, having progressed from the days of a clunky computer screen, instead a smaller but no less overt head device acts as the current makeup for this uncertain technology. Arguably now a toddler, society is beginning to gear up for VR's use in more advanced industries, whilst the rest of us are still getting to grips with just how we play this thing.

Multiple comparisons are made to the birth and slow, ongoing death of 3D. Once a new landscape for creatives and viewers to explore, now an extortionately priced gimmick with some unfortunate side effects. 3D is unlikely to face the same resurgence as vinyl or denim, having already gone through multiple generations since its first use in 1915.

Perhaps virtual reality has more of a place in theatre, Jessica Bishopp argues, an artform where the audience already have the freedom to look where they want, as opposed to film - when an angle of a scenario is chosen already. Ultimately though, this is a platform likely to become solely the domain of uber fans once the initial voyage has been made by the majority.

Coffee slurped, VR debated and streaming services praised, this small crowd's minds are truly caffeinated. Now to enjoy the rest of the festival. 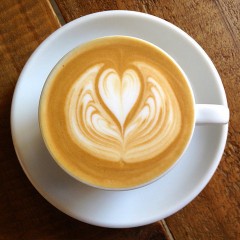