Fox Searchlight's latest film Jackie presents the power of TV personalities in a time when the media was only just gaining momentum, but this cautionary tale of vanity highlights a very modern issue.

The Kennedy's were a family who recognised the growing influence of media platforms; the president harnessed it to great success in his election campaign and the first lady used it to offer a more intimate perspective on the administration. The pair, portrayed by Natalie Portman and Caspar Phillipson, encapsulated an era defined by its leaps in technology and the chilling vanity that came with it. From Portman's painted smile to Phillipson's radiant charisma, the film demonstrates the importance that director Pablo Larraín puts on crafting a public personality, as a negative reputation poses a threat to success.

However, this omnipresent threat does not just belong in the realm of celebrity anymore.

It comes as no surprise that we live in a world obsessed with image, encouraged by television since the 1960s and social media since the rise of Mark Zuckerberg.

Perhaps it's a good thing that we all aspire to live creditable, fulfilling lives – but a pressure to hide negative aspects of our daily activities is often a trigger for many mental health problems. A 2015 report from the Office for National Statisticsstated that out of the total of children who spend no time on social media, 12% possess symptoms of mental ill-health. However for those who use social media for 3 or more hours a day, this figure rises to 27%.

Despite this, as the internet emerges from its infancy, we have grown to be a lot better at avoiding this fixation with appearance. A celebration of diversity in body image, ethnicity and background does exist in some corners of the internet. But one only has to swipe right to see the contrast; the success of the Kardashians. Having earned their admirers through appearance led campaigns; their place as role models is questionable.

After Kim Kardashian was robbed at gunpoint in Paris in 2016, arguments surrounding her excessive use of social media became prominent. Her armed experience is shocking and does initially provoke sympathy, but her display of wealth on social media is at times rather ugly. This makes Kim Kardashian an easy target for media outlets everywhere, her Instagram a treasure trove of vanity driven artwork.

Much like the Kardashians pioneering use of social networking sites, Jackie offers an insight into the glamorous yet grotesque angle of the media - modern day public personalities, take note. Perhaps we should listen to the warnings of history, and look beyond the Kennedy's winning smiles. 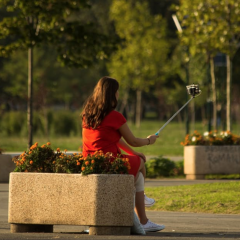 'Jackie' and the value of vanity