Sexual abuse cases have recently been tearing through Hollywood, more shockingly than ever before, showing us that there are some problems money and fame can't solve, for even the most high-powered women.

Are you a woman? When you hear the word, do you instantly begin to empathise with the connotations? Or perhaps, as a man, you sympathise with them? There are no shortage of grievances, of all manners, that a woman has to put up with during her life- and now, more than ever, it's becoming evident that these aren't problems that wealth, fame, or success can rid you of.

The allegations made regarding Harvey Weinstein's history of sexual abuse were recently published in the New York Times, with statements made by several actresses he has worked with over the years (including Ashley Judd and Rose McGowan). The timeline of allegations spans nearly three decades, and over 30 women from different backgrounds have come forward to add their voices to the discussion; the likes of Cara Delevigne, Kate Beckinsdale, Angelina Jolie and Gwyneth Paltrow have all made allegations claiming that he has harassed them on at least one occasion.

While all sexual abuse cases are horrifying by nature, Weinstein's high profile gives this case a particularly disturbing edge. All the qualities that we would usually associate with power (and which would certainly establish male equivalents in a position of control), such as fame and wealth, have been nullified against even the most blatant and violent misogyny. High-profile women, respected in their field, rich enough to own mansions in Beverly Hills, are no more immune to these advances than… well, us. Women as a collective always have been at the mercy of men; our colleagues, friends, even family. Yes, society has progressed. Yes, of course we are far more advanced, and in less need of classical first wave feminism than we were a century ago. But yet, these skewed principles undermining our every move scream to me that we're still very much a society in development.

The idea that women are dictated by (and consequently reliant on) the men in society only darkens further when this particular case is looked at in more detail. Quentin Tarantino, another of the most famous directors of our age, has admitted to complicity with Weinstein's actions; he has said that he 'knew enough to do more than [he] did'. This is surely the reason abusers like Weinstein stay under the radar; their friends (or again, even family), are likely to feign ignorance on the situation, or else actively protect their colleagues from prosecution. Tarantino, with a profile arguably higher than Weinstein's, had the power to expose him and potentially avoid the harassment of many other victims. Complicity, even in its most passive form, breeds crime- it is said that 1 in 4 women have been subject to some form of sexual abuse, yet the number of abusers remains unknown.

A solution must eventually be sought, but this will surely come in the form of a gradual process rather than an epiphany. The process seems to already have begun; the #MeToo campaign, spread across social media for the purpose of recognising and including sexual abuse victims, has seen countless women share their experiences and gain some much-needed unity. The fear of ridicule, scorn or disbelief often prevents victims from coming forward, but it is vital that they do; this is a huge step in preventing at first the particular case, and from then on, similar cases that may potentially happen in the future. Whilst we may, as a society, have a long road ahead in eradicating this issue, a factor we have control over -decisively the most important factor- is our solidarity.

Vox details a full list of women who have made allegations against Weinstein. 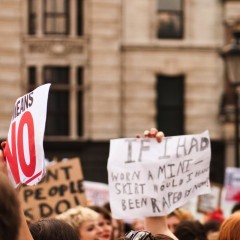 Womanhood: a problem you can't pay away

Sexual abuse cases have recently been tearing through Hollywood, more shockingly than ever before, showing us that there are some problems money and fame can't solve, for even the most high-powered women.