Since when did the Thor franchise become so hilarious?

Ahhh, 2017. The year that Thor: Ragnarok became the funniest movie that I have watched. Full of colour, badassery and banter, along with the occasional innuendo courtesy of director Taika Waititi and writers Christopher Yost, Eric Pearson and Craig Kyle. Oh, and stars Chris Hemsworth and Tom Hiddleston too – this will be enough to make you think 'gosh, since when did the Thor franchise become so hilarious?'

In his third solo adventure, Thor (Hemsworth) and his brother Loki (Hiddleston) are searching for their father Odin when they run into – cue gasps – a family member previously unknown to the duo, revealed to be Cate Blanchett's Hela, the Goddess of Death. From the moment she arrives, chaos ensues – she destroys Thor's hammer and invades Asgard, intending to rebuild it in her image, leading to a downfall for our hero.

What I enjoyed most was the way in which the film was written – it was filled with action, references to other movies, the epic music and the banter. To add to the enjoyment, we encountered old heroes (no spoilers). Taika Waititi has done an excellent job of creating excitement – fast enough to be thrilling, but slow enough to keep up. Well done Taika Waititi. 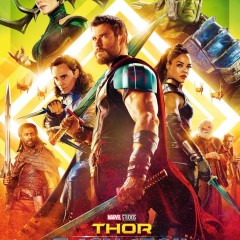 Since when did the Thor franchise become so hilarious?