During a climate of cuts, it is important to consider that not every arts project requires a West End budget.

It is a windy day in Hull city centre; Google Maps glows before me, pointing towards an imposing block of concrete known to locals as the restaurant 'Kardomah 94'. I timidly walk up it's steps, clutching my iPhone in bemusement as Siri barks the phrase "you have reached your destination". I am expecting a theatre. Instead I am met with the knowing look of a young waitress, she has seen my kind before; a confused looking audience member, hungry for some spoken word.

Directed down a maze of corridors, Kardomah 94 houses a superbly sturdy studio space. Populated by about 30 heads of greying hair and the occasional streak of pastel, four pillars of concrete mark a performance area which is illuminated by a minimal lighting rig whilst a single microphone occupies the stage. For the next two hours my ears are charmed by the glorious Hull accent spouting an array of spoken word talent - all for free. And it's these kind of fringe venues that inspire regular community events; the appetite in Hull is growing.

And this is all part of Hull's City of Culture 2017. The title brought a welcomed budget of £13m for upcoming projects, but more importantly gave Hull the confidence it needed to celebrate its identity through performance, dance, poetry and whatever else it could throw its energy at.

Returning to my afternoon of spoken word, guests are asked to jump onto stage with whatever creative juices they have been brewing and share it with an audience. Despite the grim outdoors on this particular Wednesday, the crowd is eager, supportive and ready to listen. This attitude is integral to keeping local culture alive.

The venue itself is basic, patchy, but simply asks to be used. Events such as these require the smallest of budgets and enrich the lives of locals without the expense of a West End ticket. They have the ability to bring communities together, encourage positive attitudes towards diversity and highlight local talent outside of the daily. In order to encourage diversity within these spaces, it is important that a good proportion of local events remain accessible and free. With hundreds of free activities happening daily in Hull as of 2017, this city has become a shining example of encouraging community through the arts.

So in the midst of a society heading towards increasingly isolationist policies, let's take inspiration from Hull. In order to bridge gaps in communities, we need to put more energy into encouraging ideas that simply bring people together under one roof. And in turn, we could face greater cohesion in the political sphere too.

Take note from Janet Bark, a professional gardener in Hull who decided to take two weeks out of her work to spread the love of Hull's yellow day in June. Hiring an empty space near Hull's docks usually used for temporary offices, Janet filled the room with memorabilia from the day, inviting passers by to appreciate the colour yellow. The exhibition has been a "great success", she told me, acting as a reminder for locals that their community is strong and can be united for a simple cause.

Clearly, free community arts projects set up by locals themselves are not impossible, and they are essential to creating a healthy cultural appetite in our society. Thus making for a balanced meal amongst the divisions of Brexit, increased austerity and growing isolationism.

So don't let the big budget giants of the West End and beyond intimidate you; grab a friend, grab a space, and get that idea planted. 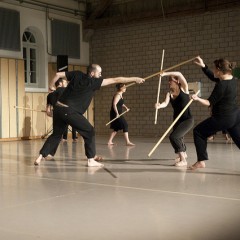 During a climate of cuts, it is important to consider that not every arts project requires a West End budget.