TED Talks, the perfect place to share groundbreaking ideas with other thinkers.

Unlike the 'TED', it's little sister 'TEDx' is a programme of local, self-organised events that unite thinkers to share a TED-like experience. TED Talks video and live speakers combine to spark deep discussion and connection. Sharing the theme of 'The Next Stage', students at the Royal Central School of Speech and Drama collaborated to produce an event grounded in theatrical roots. Organiser Jake Saunders states, "Theatre is an extension, a reflection and a response to humanity. We are therefore at the forefront of these very human shifts." As the world shifts and shapes, we're provided with fruit to decipher and question what really is next.

The range of talks can be found here which feature a range of stimulating speakers discussing fascinating issues which ranged from: Musicking, redemptive power of poetry, defining millennial success and my favourite, 'Keeping Relationships Alive When You're Dead'.

As you can imagine, with 20 talks, you do not want to read a transcript of what was said. However, you are more likely to be more interested on the ideas we retained at the reception afterwards. I do not disappoint. Here are the highlights that really got us gasping, squealing, pondering and resisting.

"The world did not end when I took a risk."

Life goes on as Ali Godfrey, founder and artistic director of Generation Arts discovered when facilitating projects with young adults, particularly those who had 'slipped through the net'. Instead, the young adults became more confident after they had taken a risk. They could fearlessly advance. The bigger the creative risk, the great affirmation in a young person: the bigger the reward, an increase in self-belief and confidence and the more capable they are to release their creative potential.

"Be the change you want to see."

Dr. Sylvan Baker is an academic who should also consider motivational speaking. When broken, fix the glass with gold. He used the example from his own days as a student, whereby when he was doing research, his professors would not know about black theorists in his field. Therefore, they were not on any syllabus and Baker found it difficult to relate to his courses. Turns out, his professors simply were not aware. But, he advocated that you need to find the researchers whom you admire and put them into your work, so that you raise awareness. That way they can be integrated into the system and we can work towards an inclusive higher education system.

"Knowing what you don't want is more important than what you do want."

All-round talented human being Sally White bounced back from chronic fatigue syndrome reflective and realised although she had a good job, money, a car and nice apartment... she didn't feel successful. Instead she felt nauseous. The old model of success doesn't work with success and although millennials are the "most highly educated generation ever," we are being told that a trial and error culture is not permitted, when it should be championed. We should be allowed to take on risk, without having to justify ourselves. We should stop comparing ourselves to the past, parents or colleagues and it's okay to take time to realise what we don't want. We will reap the rewards later.

"Never give yourself a reason not to do something."

The 'life-ist' Ann Akin had a break up, which made up her life and career. Our body handles rejection as it would with physical pain, so if you are facing rejection, remember that it will become a small bruise. It may still hurt, but the best way to get over rejection is to make a plan. You can never not do something. If you don't know a skill, learn it from someone who does or hire a team. If you have no money, work more hours at work. If you know no-one in the industry, make friends. It sounds tough, but 'you are enough' and it won't happen overnight, but you will find a way of getting what you want. Except if that's your ex, well, who knows?

"The dead could be present online."

By far the creepiest thought of the day, but nonetheless worth waiting for was from Paula Kiel. With new computer-meditated technology, you can record a video for your great-grandchildren to watch online in 100 years time. Websites like DeadSocial, Email from Death and Lifenaut facilitate exactly this. You could create a bot of yourself, for your future relatives to greet. You can schedule Tweets, schedule emails and who knows, our great-great-grandchildren may diligently be speaking to a hovering image of Barack Obama in their history lessons. Think about it, the dead can do exactly what we do on a daily basis online. Does that mean we could be communicating with relatives we think are alive? Time to call Grandma. 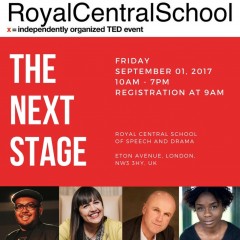 TED Talks, the perfect place to share groundbreaking ideas with other thinkers.