When we think of Christmas and art, we immediately think back to pre-enlightenment art, picturing religious scenes depicting the original meaning of Christmas. But how have these ideas been translated into modern art?

It's Mid-December and we are now fully surrounded by Christmas. You walk into your favourite shop and hear Michael Buble's Christmas album. You turn on the TV and watch 'Love Actually' repeated again, despite the fact you watched it last year. You go to the theatre to watch Matthew Bourne's 'Swan Lake', or have a laugh watching the latest celebrities in 'Dick Wittington.' As a nation we have our favourite things to see and do at christmas which we enjoy year after year, whether listening to a particular song, watching a christmas film or going to the latest production at the theatre. Yet each year, the timeless classics get updated, rereleased and changed. A new artist brings out an album of christmas covers. A new film with the same christmassy happy ending is released. The same theatre is watched but with a brand new production and cast. Christmas traditions are repeated year after year but are constantly updated and modernised.

Does art have traditions where christmas is concerned? When we think of Christmas and art, we immediately think back to pre-enlightenment art, picturing religious scenes depicting the original meaning of Christmas. But how have these ideas been translated into modern art? After all modern art is known for reusing older iconography and reimagining it into new pieces with updated meaning. Yet modern art does not seem to have done this with Christmas. Christmas rarely features in works of modern art, but when it does it is as an entirely new concept, completely disconnected to any religious connotations, separate to pre-enlightenment art and having nothing to do with an updated version of older art. It takes itself away from the religious meaning of Christmas entirely, instead commenting on the mass consumption of Christmas, its' meaning entwined with the Christmas films, music and theatre that we go to every year, often judging these in a critical and negative light.

'Christmas Day' by Colin Self also criticises the consumer culture which we have built up around Christmas. The traditional image of children asleep in their beds at Christmas is tainted. The sleeping children are usurped by disney's Mickey and Minnie Mouse, becoming part of consumerism themselves, feeding the destruction of the traditional image of Christmas. The traditional Santa Clause figure - waiting to enter the room to give them their presents - appears out of place, disconnected to the room he is trying to enter, unable to blend in to the 'modern' Christmas scene. In the 1990s when Self created this artwork, Christmas had become about what toys children receive, what consumers can buy and what (Disney) movies you watch. The traditional notions of Christmas as a time of thanksgiving and receiving are becoming lost behind a wave of consumer culture. 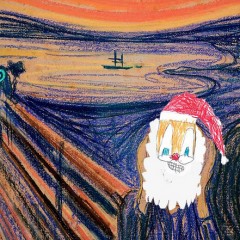 Christmas and art: what's the story?

When we think of Christmas and art, we immediately think back to pre-enlightenment art, picturing religious scenes depicting the original meaning of Christmas. But how have these ideas been translated into modern art?