I'm Gigi and for my Gold Arts Award Unit 1 Part D, I have formed my view after extensive research on Women in Film. I talk about age and gender discrimination primarily as well as racial discrimination.

It seems the fate of young people has already been decided for us. Whether it be through laws and legislation, politics, examinations or grades. It seems that nothing is based now purely on talent. I want to encourage young people to speak out and realise that it doesn't matter who you are or where you come from, you must speak up and have a voice.

That is why I want to talk about the discrimination shown towards women in film, and as someone who wants to be an actor, raise awareness of it. I quote from The Guardian that "99% of women in the film and TV industries have faced sexism". Now that is shocking. The types of discrimination that I feel are especially relevant are age and gender discrimination and consequently the wage gap. Racial discrimination, I feel, even though it is still a huge problem in the industry, is now being somewhat clamped down on and is certainly more talked about in the media, especially following BAFTA's decision that from 2019, every film, in order to be nominated, must fit its diversity criteria. Also, this year at the 2017 Oscars, more people of colour have been nominated. Viola Davis and Octavia Spencer led the Supporting Actress category while Denzel Washington led the Best Actor. However, the last woman to win an Oscar for Best Director was in 2010 and none were nominated last year.

"Hamilton the Musical" also won a majority of the awards it was nominated for at the 2016 Tony Awards, most winners being people of colour such as Leslie Odom Jr and Daveed Diggs. If like me you have one ear in the Broadway world, you may have heard of "Oak, Mandy and the Great Casting Mess of 1812". This involved an African American Actor called Oak Onoadowen (from "Hamilton" fame) who plays Pierre in the musical "Natasha, Pierre and the Great Comet of 1812" (listen to it, it is stunning) who was asked to leave the show 3 weeks early in his run for a white American actor (Mandy Patinkin). There was a huge backlash and accusations of racism but personally I think the whole issue was mishandled after some producers were greedy following a loss in ticket sales, as Mandy Patinkin is a bigger Broadway and movie name, because the show won an award for its diversity and the whole cast especially its POC cast members hit back at these accusations.

I strongly believe that sexism is one of the biggest problems not only facing the acting industry, but in society more generally. Women, I've discovered, used to not be very important figures in many films. From the early days in cinema, they were usually the wife or the girlfriend or sexualised and treated like second class citizens. Look at "Dr Strangelove". The only female character is the younger lover of a General. Another example, is in the Charlie Chaplin films where women were restricted to being the damsel in distress. Sometimes even if an author had created a female lead, a man would be cast, which not only disregards women in every sense, but it does not respect the writer at all. This is an example of how things are hopefully changing due to the theatre especially through gender bending roles such as Shakespearian ones.

Age discrimination occurs for both genders, although far more women are discriminated against for their age than men. Meryl Streep, who is 68 years old, has been nominated for more Academy Awards than any other actor in history. However, despite all her success, she often says how she is typecast in older roles since reaching 40. In the 2014 musical comedy film "Into the Woods", she played an old witch. She said: "Once women pass childbearing age, they could only be seen as grotesque on some level."

One of my inspirations is Emma Thompson and the reason she inspires me is because she is the one person to have ever won an Oscar for both screenwriting and acting. This makes her a fantastic role model for women to achieve success in these fields. In 1995, she starred alongside Hugh Grant in "Sense and Sensibility". She was told that she was too old to play the romantic lead opposite him, but she was only one year older AND she adapted the screenplay for the film and won one of her Oscars for it. In comparison, Audrey Hepburn in the film "Charade" starring alongside Cary Grant, was 30 years younger than her leading man. There was no objection that she was too young or he was too old from anyone. You'd think in 30-40 years, a lot would have changed.

The late great Carrie Fisher, who played Princess Leia in the Star Wars franchise, revealed she was ordered to lose weight to reprise her role in "The Force Awakens", and while she did, she made sure it didn't let it define her as a person. She said: "We judge beauty like an accomplishment and that's insane." She has said unfortunately in the industry it is the other way round for men and women, but women are hit harder.

Today we have inspirational directors like Angelina Jolie who is also an actor and producer, as well as Marianne Elliot who directed the "Curious Incident of the Dog in the Night-time" and has been named one of the most innovative directors of all time. However, in Shakespearian times, there were no women on the stage or behind it, so surely this discrimination shouldn't continue as society has evolved in the last 500 years, but then maybe society hasn't evolved as much as we would like to think.

I was apprehensive about the new "Wonder Woman" movie. My view was that if it flopped, unlike male-led movies, directors and studios would give up on making female-led superhero movies. Just take a look at some of the spin-off Avenger films. The new "Ghostbusters" movie was really terrible; and I'm not a harsh critic, but if people have the mindset that that is what all female-led movies are like, are we just reversing all that we have achieved? We need better representation and that's why "Wonder Woman" was brilliant. It had a strong female lead and a female director. Some leading men with huge levels of power and influence in the industry called the "Ghostbusters" reboot 'vile and misogynistic' but who would say that about "Thor 2"? We were very lucky when critics loved "Wonder Woman" and it is also the biggest film of the summer.

The world's highest paid actress, Jennifer Lawrence, made $52 million in the 12 months leading up to June 2015 – an extremely impressive sum but still well below the $80 million banked by Robert Downey Jr, the world's top-paid actor who made fewer films than she did that year. Despite her success with films like "The Hunger Games", both she and her "American Hustle" co-star Amy Adams, who was the female lead, still only received 7% of the film's profits; 2% less than the film's male leads, supporting actors and featured characters. While Jennifer may have had a supporting role, the money actors receive is often awarded based on their status and I think we can all agree that right now she is more well-known than Christian Bale; and she was the poster girl for the movie! When she discovered, as this was all concealed from her, how much less she was earning than them, she confessed: "I got mad at myself…I failed as a negotiator because I gave up early." However, surely it wasn't her fault and she shouldn't be the guilty one?

Although, I understand that some women do fit certain stereotypes and that I suppose the media focuses on those stereotypes because there is some truth in them, we need to show the world and Hollywood that so many women defy these stereotypes and are more than what is shown on screen. Film must represent our world rather than someone's imagination or solely for profit. In an article I read from The Center for the Study of Women in Television and Film, there are people trying to insinuate that certain stereotypes appeal and that men do not bother to see female-led movies whereas women do make the effort to see male-led films, due to the "appeal", but this idea is certainly not fact and is being constantly challenged. When I saw "Wonder Woman", there were 3 women in the cinema and many rows of men.

In 1917 (in the UK), women fought for the vote and won. Now women must fight society, again; a fight that will take longer, but it is a war we will win. While women are more equal nowadays, I believe that there is still unspoken prejudice against women that perhaps the film industry can lead the charge to change. Independent and strong women in film can make such a difference as Viola Davis said in an interview after starring in "Commander in Chief": "I was only in office for one season – I had a tragically short administration," says Davis, "but they did a survey afterwards that showed that people were 63% more likely to vote for a female candidate for President. Isn't that extraordinary? And I was behind the desk 19 times, 19 episodes. So that's an enormous impact and it's true everywhere. When we studied the occupations of female characters on television, one of the most well-represented occupations was forensic scientists for women. Because of all these CSI shows and Bones and all that, there's a lot of female forensic scientists. In real life, so many women are seeking to get into that profession that colleges are scrambling to keep up with it. Because they saw it on TV!"

Sexism is used and often hidden in media out of fear; out of fear for a revolution in filmmaking and even Hollywood itself that some are trying to delay. Some actors do not want to seem like a stuck record, some are too scared for their career or for their families so they just speak without any action. I feel, however, an obligation and duty to my generation and to those brave women who fought before me, to gain equality in our brilliant workplace. 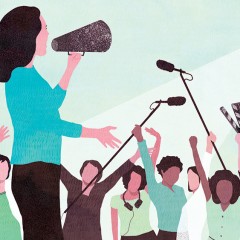 I'm Gigi and for my Gold Arts Award Unit 1 Part D, I have formed my view after extensive research on Women in Film. I talk about age and gender discrimination primarily as well as racial discrimination.