I like that idea. Books should be all those things. And a lot of us take for granted that that is the case. But as a reader, writer and workshop leader, I can tell you that isn't always true.

I get to spend a lot of time with young people, from a variety of backgrounds and in every single workshop I run, there's at least one person who has never seen themselves in a book. Not once. The numbers vary but usually it's much higher. I'm working in a (fairly affluent, white, middle class) school in Bath right now, and even there, out of a class of 26, 4 young people have never identified with a literary character. That's 15% of the class. 15% who are being implicitly told their narratives aren't valid; aren't important; won't sell.

As a queer, genderfluid, disabled person, I'm one of those readers, too. I've become adept at taking what I can and filling in the blanks. Pretending. But it still hurts that I have to, and every time I hear, 'When will they write a book for me?', or 'Why should I bother?' it breaks my heart. It isn't good enough.

There's argument that it's getting better, that publishing is moving forward, making changes. And it is. We should absolutely acknowledge the hard work that's being done across the board; the open, public conversations, the proactive measures to bring more diversity into publishing at every level. It is changing.

But sometimes that, 'We're doing what we can; we're trying, it just takes time,' response (however true it is) feels like a slap in the face. Sometimes it feels like code for, 'We're trying, but we're not quite ready for you yet.' And that isn't good enough.

In almost the first exercise I did with the Bath school, students had more trouble imagining POC, trans or disabled characters than they did imagining life as mermaids or wizards or pop singers. Why? Because those narratives are hidden away, harder to find.

And because we're not seen, we're misunderstood, forgotten, disbelieved and further disenfranchised.

In workshops with young people, I try to foster a safe, inclusive space for examining stories at the root; looking at the types of characters and narratives we have and those we could have.

I offer opportunities to try out new perspectives, to explore.

It can be terrifying to stand in front of a room full of young people and talk about these things. But visibility matters.

After a recent speech at a school awards night, I spoke with a group of students about books and writing and how, yes, their stories matter and they should write them. Finally, one of them muttered: "Are you really queer? Because I'm a lesbian and she's bi, and she's bi, and…" They were all in awe over the fact that queer writers exist; we can succeed.

This week, a teacher told me that it's brilliant that I can be so open with the class, because the structures of school life don't often allow for that.

And I regularly get:

"Characters don't struggle the way I do."

"I'm not the kind of person you get in books."

And that's the thing: how can you imagine yourself somewhere, if you have not seen the pictures, or a map, or heard tales of those who've gone before?

It matters that they see me whole and fallible and fighting.

And it matters, I think, that they're trusted with my story; that the room is set up as a safe place for their own, in turn.

It's incredible to watch the penny drop that there is more than they've been given – more possibilities, more story space to inhabit and explore.

But it saddens me that we're still at that point, where we can't all walk into a library or bookstore and be met with an array of mirrors and windows and doors.

We need to do better. We need to reflect the world. To give people heroes to look up to and adventures to strive for; we need to give people permission to be flawed and real and messy and still accepted – still worthy of narratives.

We need to rewrite the narrative of publishing until everyone has a space within it to call their own. Because everyone deserves that possibility. 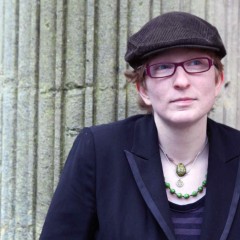 Visibility Matters. Or, Why I Allow Myself To Be Labelled