Paines Plough, being the national theatre of new plays, took the time to tell us novice playwrights and theatre makers what makes a play.

Take a moment to think of all the steps you need to consider, then compare yours to what Paines Plough consider. Thank you to TheatreCraft for joining us together!

On Monday, the creative madness of TheatreCraft immersed itself throughout a rather posh room in the Waldorf Hilton in Aldwych. TheatreCraft being the biggest non-performance careers event in London, whereby many theatre practitioners and arts venues took to the stage to engage young people, aged 16 to 25, into theatre careers. Workshops included every possible career or art form under the umbrella term 'Theatre' including casting, scenic art and playwriting and there was the chance to speak to so many experts from RADA, LAMDA, the Young Vic and National Theatre to name but a few. There was something for everyone to explore and I managed to attend a talk led by Paines Plough, who are frankly very genuinely nice people open to talking to anyone interested in putting on a play.

As creative as the team at Paines Plough are, they tasked us with how to put on a play. They provided a long list of steps of everything to consider when putting on a play. Would you have placed these in this order, or what would you have done differently? Is there anything you would have not considered?

Still interested in putting on your own play? Join Hiive, the professional network for creative people.

Want to find out more about tours of new writing near you? Follow Paines Plough on Twitter. 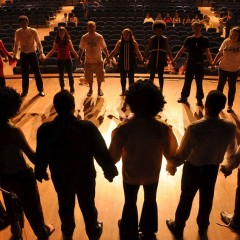 TheatreCraft 2016: Putting on your play with Paines Plough

Paines Plough, being the national theatre of new plays, took the time to tell us novice playwrights and theatre makers what makes a play.