Voice MagBlogs#TBT: Malcolm in the…

A stroke of genius that resonates with and reflects every family

I don't know about you, but I feel that this is one of the best TV shows ever made. Bold statement, I know, but justified. I am yet to find a show that so perfectly encapsulates the typical family dysfunction in an amusing, exaggerated- yet impressively plausible- way.

It makes me feel incredibly old to think that this show started in 2000, and while I don't remember it starting, I do remember when it finished in 2006. When I originally read that I thought "it not that long ago?", before remembering that it is now 11 years ago.

To put that in context, I was 2 years away from starting my GCSEs - I finished my masters last year. To emphasise it another way, actor Erik Per Sullivan, who played Dewey, is now 26.

The final episode is one of the few times I remember the whole family sitting and watching something on TV. I think we even ordered an indian takeaway...

Although almost every show was self contained (excluding a few multi-part arcs), you do get a sense of chronology. More importantly, you follow the main characters as they age, deal with interactions between each other and society, graduate, marry and everything else that regular humans have to go through.

It was grounded in realism yet obscured with a layer of amplified and exaggerated scenarios. The simple family day out descending into chaos and mud-fighting is perhaps not an event most people have experienced, but I think that many families could relate and see similarities between the on screen characters and their own families.

One theme that I feel was very well covered was the feeling of isolation. I may be analysing into it too much, but at many points during the show's life you can see the characters struggle with the feeling of being left out, different, or "in the middle". I think the thoughts, feelings and questions regarding their identity were played out exceptionally well and again, mirror that of real life.

It is one of those shows that you can watch again and again; it never gets old.

I am seriously torn between wanting to say I wish they made more episodes and being grateful they stopped before it just became long in the tooth. I think, ultimately, I sway towards the latter: it is awful to see great shows go on past their prime.

Malcolm in the Middle - the family starring TV show that knew when to stop... yes I'm looking at you Simpsons! 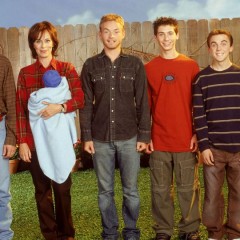 #TBT: Malcolm in the Middle

A stroke of genius that resonates with and reflects every family