No, it isn't as good as the Dark Knight but to skim over this epic film is unforgivable!

I know what you're thinking, does this count as a #tbt, as it isn't really that old? Believe it or not, this film was released way back in 2005, which at the time of writing is 12 years ago. That means I was only 11, so I argue it is in my childhood. Either way, this is my vanity feature, so I get to decide the inclusions.

Anyway... Batman Begins. The film that kickstarted the Nolan trilogy and my love for comics. Although I have tried to hide it on Voice, I am a huge comic geek, with a particular love for Batman. The arguably psychological instability of the character is fascinating in its own right, but the fact that he has no 'superpowers' means in theory, anybody could be Batman. The thought that the everyday man could prevail over evil using nothing but willpower and billions of dollars is very enticing to an 11 year old… and a 23 year old.

So why have I chosen Batman Begins, when so many other Batman films have been released? You might not know that there have been several other films released before the Nolan trilogy, and some were really rather good.

Tim Burton directed Batman (1989) and Batman Returns (1992) and both have his signature darkness, which is very much in keeping with the dark and gritty tone I think Batman should have.

However, Christopher Nolan takes that darkness and drops it straight into a modern environment, making it instantly more realistic. Further enhancement to the realism is the gadgets. Gone is the 'Bat' prefix, and instead all gadgets are shelved military projects, repurposed for pummeling bad guys by the billionaire vigilante.

Batman Begins did the uncommon thing of actually exploring Bruce Wayne's past. This is both refreshing and important, as it explains the relationship with Ra's al Gaul, and Wayne's unwavering dedication and motivation towards saving Gotham. Some say that this made the film dry, as there was a lot of time without Batman on screen, but I disagree, and argue that it provides background and depth to the character.

The acting is solid throughout, as is the soundtrack, and the ending introduces Batman's archenemy and polar opposite, the Joker - phenomenally portrayed by the late Heath Ledger. So great was his performance, and the film as a whole, that some may not even be aware that Batman Begins came before it, so I really recommend picking it up.

After all, it can't be worse than the Schumacher directed Batman and Robin (1997), but I'm hard pushed to think of anything that is. It was the film that killed the franchise for 8 years, and took the likes of Nolan and Batman Begins to effectively reboot the franchise. 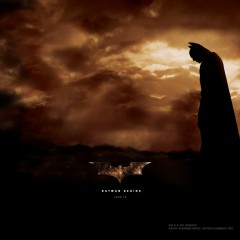 No, it isn't as good as the Dark Knight but to skim over this epic film is unforgivable!