Actress, Mogali Masuku, from the Royal Central School of Speech and Drama, leads in the brilliant professional debut as Lady Macbeth in Iris Theatre's 10th Anniversary production of Macbeth

Recognised for her brilliant performance in "From Morning To Midnight" by George Kaiser and John Walton (director), Mogali Masuku now talks about her first West End Theatre performance...

What are your thoughts on your main role as Lady Macbeth?

I love her. I'd love the opportunity to play her again and again. I felt I knew her more as my time with her was drawing to a close. It'd be interesting to find out what proved to be different next time. And the next.

How does it feel to perform for the Iris Theatre's 10th anniversary Macbeth production this Summer?

I don't focus on that because that can't be my job. That's the practical me speaking. The truth is, it's my nature to focus on the people and the work. The scary stuff has to step aside in order for the everyday creating to work.

How do you often prepare for your shows?

Research. Research. And more research. I love learning as much as I can about the world the characters live or lived in. What their history is or was. And I gorge in that written word. Then there's the physical preparation, which is just as important, if not more important depending on the role.

How does this compare to your other roles?

This was my first professional job post drama school. I'm keeping it inside my heart.

You've played a lot of different roles in your career - when did your fascination with theatre begin?

When my mother called me into the living room so we could watch Swan Lake together. My imagination ran wild. I sooo wanted to do that. Then I figured out that the people in the TV didn't live inside it. They were actual people. I think that seed of hope was planted then, that I would one day join them.

What inspired your interpretation of Lady Macbeth?

She did. She was a very interesting woman, Lady Gruoch. I hope I'm spelling her name correctly. There were so many variations of it. She was brave. Intelligent. And unfortunately, as is often the case, she was a woman born out of her time.

What role do you see yourself playing next?

Whatever role calls to me. I know whom I want to play at some point. James Bond. Macbeth. All those beautifully written parts that give you an actual person to explore right there on the script, and yes, those roles that people may think can only be played by men. There's an openness that comes from being born an African and a woman that I think gives me a different insight into how to approach those roles. I would love to approach them.

Have you got what it takes to be an actor? Check out the profile on Creative Choices, a website suited for people wanting a job in the arts. 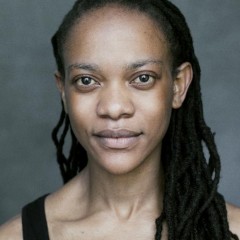 Actress, Mogali Masuku, from the Royal Central School of Speech and Drama, leads in the brilliant professional debut as Lady Macbeth in Iris Theatre's 10th Anniversary production of Macbeth