Voice MagBlogsDrama to be taken fr…

Arts Argument – Are arts subjects a valuable part of the school curriculum?

One major concern for the arts in today's society is the Government cutting funding to arts and arts in education. There is a huge report stating that performing arts and drama are under disturbingly bleak conditions in English schools as it stands in 2014/15. Due to the government saying there is no sign of any statutory drama curriculum in the offing, there will be no secure entitlement for children to learn about and take part in regular drama lessons. I will explore the argument between those who are for and against this.

Drama is more than just training young and old actors to become an inspirational person, it has so much more hidden meaning to it. I strongly disagree with the coalition government, who now are attempting to ruin education by putting an end to drama being taught on the curriculum by 2015. After researching and reading a number of different articles regarding their new enforcement and what they believe it's going to achieve, I will form my own argument put forward both sides and my own insight to this battle.

While researching I have learnt that the idea of drama and arts subjects being taken away from schools had been discussed for a long while. There is an article published 3rd November 2011 stating threats of drama being pulled out of the curriculum this article is called 'school of arts education at risk, reports warns. In 2011 the government cut the number of postgraduate's certificates of education places for trainee teachers with arts and music mostly being the main places reduced by up to 220 respectively. This is stated in the article of the guardian page 2/3 evidencing that the government are comfortable to watch these figures drop, you can also witness that 27% of schools already withdrew arts subjects from their curriculum in response to them putting EBac forward. Based on this information I believe that the government are supporting the reduction of arts in education.

Not only was drama mentioned in these warnings but dance too is being affected, in primary curriculum key stage 1 and 2 drama is used as part of listening and speaking yet now secretary Michael Gove has concluded that it is no longer needed. Yet despite all the threats there are always going to be people who are against these choices and will protest against the government taking drama from the national curriculum. During research I discovered that children's test results increased by 19% as they have had participated in drama activities. It has also been known that the higher amount of young people that study drama can achieve higher grades in maths and reading due to high standard of learning via drama activities, why would the government want to discourage this?

There are a large number of people that believe in drama being firmly on the national curriculum. There are different opinions, many that don't support the arts, but the voice that is for drama states huge unarguable facts; that drama brings all the different branches of art forms together, it gives people the chance to let loose and build confidence enhance and stimulate imagination. There are so many positives that drama brings out for people of all ages and backgrounds, it gives them hope, a chance to choose their own career paths, gain social skills, free both body and mind and gives an opportunity for self-expression you to be yourself. In a number of different articles there are positive responses to keeping the arts in schools, for example an article from the guardian states that 90% of young people they had come across agreed that drama improved their lives with the same skill in confidence. They quote that young people saw drama as a way of contextualising the world around them. Furthermore there is another quote saying that the author believes to take drama off the syllabus wont strengthen its worth in schools it would only make it barmy and as cryptic as Alice in wonderland. As the article continues it shows the UK is one of greatest creative nations in the world.

People should not take away that happiness or giving the chance to a young person, even like me. A chance to be who they truly are inside with nobody watching over, marking them incorrectly and telling them they "spelt that wrong" is unique. It's a way of peoples learning, some learners aren't academic, they like to physically and creatively be able to express themselves and achieve success. Isn't this what school should be teaching and encouraging? A child's happiness?

I was taught GCSE drama at school year 9 till 11 these two years became my years to shine. Not only did it teach me my skill in devising drama and teamwork, studying plays, staging techniques, become more confident in reading and writing, staging and directing my own shows. More than all of these it give me a chance to be me, to be strong enough to head for my goal and believe in myself. I then was interested in a further acting roles and how to get there and where to go next. It built my stepping stones to my next big step in the world. I then went on to achieve my national diploma in performing arts level 3 and work with a number of different areas. Due to experiencing drama I had the ability to be an effective team player, I knew how to deal with or solve disagreements, finding an alternative result in everyday life. I strongly believe in drama being on the curriculum to take such a highly intelligent study out of children's lives I believe will only be a negative and cause more negative direction. Children learn when they are interested, when they laugh and still are taking in the first key achievement of the lesson. Drama is vital and should not be lost. 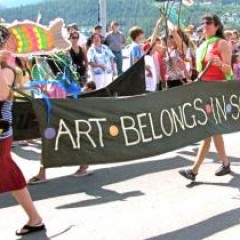 Drama to be taken from schools curriculum; is the government ruining chances?

Arts Argument – Are arts subjects a valuable part of the school curriculum?