I understand that the funding of the arts has not been the only thing that has been cut, but I also believe that many people do not fully understand why music is such an important factor in our day to day lives.

It is thought that if you listen to classical music whilst working, it improves your concentration and your output tenfold. But is there more stock in this theory than we thought? Research has been performed to discover whether students that participate in music education get higher grades and have a higher IQ than their peers. Many studies have compared groups of students against one another; those who don't play an instrument, and those who do. A man named Schellenberg conducted an investigation with three groups, a group that was given singing or keyboard lessons, a group that was given drama lessons, and a group that did neither. The results of the test confirmed that those who had participated in the keyboard and singing lessons had a higher IQ than those who had not. Additionally the group that had been given drama lessons had better social development.

Furthermore, other surveys have been organised in schools to test the same hypothesis. A group tested to see if those who played an instrument or had members of their family playing instruments had better grades than those who didn't. They tested the effects on IQ and spelling mistakes. The result was a positive correlation between the amount of spelling mistakes that students made and the IQ that students had when they had been given a music education or had music in the home. Those who played an instrument made less spelling mistakes and had higher IQs. Those who did not participate in a music education had the most spelling mistakes and the lowest IQ. Those who had family members playing were somewhere in the middle. Here are the graphs that were produced to show the results.

Other research has informed us that this higher ability is due to the use of the frontal cortex (also known as the frontal lobe). When a musician plays, they have to make their hands do two separate things, and this requires the frontal lobe. The frontal cortex also aids a musician when reading music and interpreting the music in a creative way. Reading is associated with the left hemisphere and the creativity associated with the right. The frontal lobe is responsible for long term memory of things that are usually related to emotions and for decision making. This is where you decide what is right or wrong and what is better or best. This associates with musicians because they have to be able to hear how they can make something sound better and they have to make the choices of what they want the music to sound like. This use of the brain is important because most people don't use their frontal cortex very much. Additionally you will often find that those who play an instrument will be more creative and will remember more than those who do not participate in instrumental lessons. Furthermore, this creativity can lead to 'divergent' thinking, which means that they can 'think outside the box'.

This can lead to better grades in more creative subjects, as well as the logical and academic subjects. This multitasking and divergent thinking can be very useful and could improve one's chances of being able to get a better job. 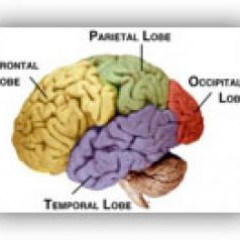