Up on the 9th floor, a group of likeminded individuals met to discuss tools in science, and how they can be used to better "support the pursuit and growth of knowledge."

The session, run by Jenny Molloy, former Mosquito biologist turned explorer of open science practices, focused on their manifesto, which outlined their desires to reduce barriers between creators and users of scientific tools.

The session built upon the Gathering for Open Science Hardware (GOSH!), which brought together 50 stakeholders in research, development, science, and more to discuss how to create the open community. They sought to create a roadmap for launching the open hardware platform, and get it distributed to institutions and policy makers.

The G.O.S.H. manifesto is structured around 10 key declarations, although these serve as guiding principles, capturing the "spirit of the movement" rather than definitive action points. Below are the header statements, although detailed explanations of each point can be found here:

One individual spoke of their personal experience where failed experiments weren't documented, so all the research that went into that failed test is disregarded. This results in time being wasted by other researchers and scientists, who, unable to read that a particular approach won't work, end up making the same mistake. This culminated in a question regarding how failure would be documented, if it would actually be at all. No definitive answer was given, although it was universally agreed that it would be a beneficial practice, especially as current devices in labs tend not to output all data.

The level of discussion was incredibly highbrow, somewhat niche, and at points slightly inaccessible. This being said, even I as a non-member of the scientific community can appreciate the noble goal of creating a more inclusive, accessible, affordable and collaborative research environment. Better documentation and reduced barrier-to-entry means more research, which can only benefit everyone. 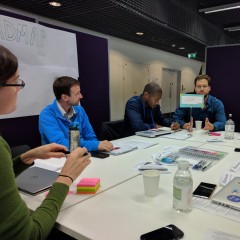