As part of the Theatre Royal Haymarket's 'Masterclass' series, wherein a master of the theatre world comes to offer aspiring Thespians, award winning actress Katherine Parkinson took to the stage.

As part of the Theatre Royal Haymarket's 'Masterclass' series, whereby a master of the theatre world comes to offer aspiring Thespians; award winning actress Katherine Parkinson took to the stage. Uncanningly intimate, informal and informative; I found Katherine's words to be both witty and wise, as she shared jewel-encrusted advice accumulated over her esteemed career. Equally skilled in acting for television ('Humans', 'The IT Crowd' and 'Sherlock'), film ('The Boat That Rocked' and 'St. Trinian's 2'), stage ('The School for Scandal' and 'The Seagull') and radio. Thus meaning that the audience were particularly interested to hear from Katherine.

Parkinson's five pearls of wisdom are:

Yes it is soul crushing at the start, but keep going and believe in yourself

→ "Cliché, I know," Parkinson admits after revealing this tidbit, but it's always good to hear it (from someone who isn't a concerned parent or obligated educator). Her dad believed she was going to make it, continually instilling in her a belief to 'hang in there' and trust that 'you're young and you can do it'. She did it and said that "telling casting directors to f**k off!" when they're being too picky was totally acceptable.

"It's like starting a car, it takes a few tries and very few go on straight away" was an excellent metaphor to illustrate her point.

Don't get too obsessed with acting

→ This may sound odd, I know. But, there are so many different lives out there to undertake rather than watching, reading, living, breathing, eating (sometimes) and practising acting. After all, reading and seeing as much as you can is important, but remember that actors "mirror life" and, if you haven't lived, you're limiting the characters you can play.

→ They're not. The only thing professional training does is to instil an extra dash of confidence, which can easily be obtained when gaining experience. "Don't worry, you learn on the job" was a nice piece of advice to share, as not everyone has access to formal training or funding to undertake continual development. This is quite translatable to different art forms as Parkinson stated, "If you're doing it, you're doing it' and training isn't always necessary for some ultra talented arts practitioners out there."

→ There is still sexism in the arts (particularly to women and even more-so to women of a certain age). Comedy scripts, which are written by men, inevitably will write women who aren't as funny as men. The solution? To get women writing! Our ancestors didn't protest for women to constantly live as inferiors to their male subordinates.

→ This tip is transferable in the sense that actors and non-actors and non-arts related folk can benefit from this advice. Auditions and interviews are the best opportunities you will receive to establish if you actually want to work with that person. "You need to make it work for you," she explains: if you feel like you'll be bored stiff working with this person, will be waiting for home-time and the pay check, then it's best that you move on.

Likewise, you should actively go and see work that you like in order to see what you want to do; to see who you want to work with and see what you can become. That way you're likely to 'click', share ideas and generally want to get up at 5am in the morning on a Sunday. The product will be of a higher quality as you're much more engaged and motivated. What could be better? 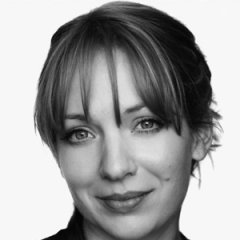 As part of the Theatre Royal Haymarket's 'Masterclass' series, wherein a master of the theatre world comes to offer aspiring Thespians, award winning actress Katherine Parkinson took to the stage.