It's no secret that the under 30s are more likely to vote Labour than Tory. In fact, for every ten years added to someone's age, the likelihood of a Conservative vote grows by points, and voting for Labour decreases by six, according to YouGov.

Labour's main push for young people was to get rid of tuition fees. So it's no surprise to discover that 63% of 18-34-year-olds ticked voted red, whilst just 27% blue. The ten constituencies containing the largest proportions of 18-24-year-old have increased the Labour vote by over 14%, according to BBC.

The biggest Labour swing was the constituency including Bristol University, where it grew 30%. A survey conducted by Lord Ashcroft, previous Conservative donor, uncovered that out of 14,000 people, two-thirds of 18-24-year-olds voted Labour, alongside 50% of 25-34-year-olds.

Enough stats. What is it that makes Labour so appealing for young people? Apart from tuition fees, Jeremy Corbyn also wants to lower the voting age to 16, giving youths the opportunity to really get their opinions heard. Why would under 25s vote Conservative anyway, after being excluded from the latest raise in the minimum wage, making the prospect of further education tougher?

Trying to give 16- and 17-year olds the vote is, to me, the 21st century suffrage. And it is almost precisely a century later. In early 1918, the majority of women over the age of 30 finally gained the right to vote, after decades of campaigns and protests. Will we, as teenagers, have to chain ourselves to railings in order for us to be heard? I don't think so.

I don't think so because to me it seems that a lot of under 18s are oblivious to the fact that, maybe, once you turn 16, you really could have the opportunity to cast your vote. Labour's supporters are largely constituted by the youth but, still - there are many 16- and 17-year olds who don't yet know which party they support. This could, of course, be largely down to the fact that they have never been pushed for an opinion. If awareness is raised and people like you and me, 16- and 17-year olds, realise they really can have their voices heard, then I've no doubt it will be for the better.

Along with tax, mortgages, and how to help deliver a baby, politics is something that all adults need to know about but has no place in the curriculum.

Emily Pieters, from North East Cambridgeshire, says, "The 2017 General Election was the first time I've voted, having turned 18 just in time. To wake up the next morning to hear about the huge youth turnout was inspiring. It made me so proud to think that my generation was finally standing up to be counted and caring about their future."

"If all the under 30s voted Labour, in my constituency of Suffolk there's still no chance of a non-Tory seat," Ben James explains. "I wish we had proportional representation. Suffolk is so strongly Conservative that it literally has no effect who the younger generation vote for."

On the topic of under 18s voting, Amy Meyer comments, "We are the future of this country. Why should we let other people shape it? We need a voice to decide the society we want to live in, because too often people forget we can make decisions too." 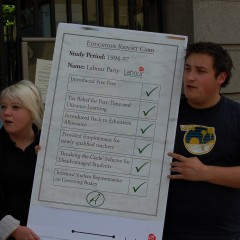