As someone who's only form of training being from a high school, I feel passionate about the fact that making it in the business shouldn't be about how much money you have. Money doesn't equal talent but to pay for higher education it doesn't matter ho talented you are if you don't have the money to pay for it, you are not getting in. I feel passionate about getting underprivileged kids into the performing arts, but what's the point if they can afford to take their talent into a career.

We all love going to the west end to see our favourite shows and musicals, but with the cost increasing 33 per cent since last year, is it really worth the money? Most people agree the overwhelming quality of the work produced is worth the prices, although most feel west end shows could do more to make the theatre more accessible to younger audiences.

West end shows have always been an amazing experience with beautifully elaborate set and huge casts, of course they are going to be on the more pricey side. But, many theatres such as the Marlowe, Canterbury have discounted tickets for students so that theatre is more accessible for young people. Although it is possible to get discounted tickets they are still very expensive, and for most are so expensive it takes months to save the money up for tickets.

Despite the high prices, going to shows on the west end is still as popular as it was when it started. Due to the fantastic experience going to the west end is, people will happily pay good money to watch one of the amazing shows due to the sheer immensity of the performances undoubtedly, west end shows show have a lot of expenses from behind the scenes to the cast itself, paying the wages of the people who put their blood, sweat and tears into putting in these performances and the hours of work that go into putting on a show like that deserve to be paid accordingly. For the west end to continue to put on such outstanding work, they have to make money from them, leading to the increase in ticket prices. But, this has not deterred thousands of theatre fans flocking to watch the shows each year, so they must be worth the money.

Clearly west end shows are a great experience but for those who can't afford to spurge on tickets are local theatres a worthy alternative? There is a divided opinion on this matter but I believe that with touring companies and a wider style of theatre on offer at local theatres they are a cheaper alternative to west end shows. As someone who loves all types of theatre from musicals grungy contemporary theatre the main reason I am attracted to local theatres is the sheer volume of different styles of theatre. Although west end does offer musicals and straight plays, there is so many other types of theatre out there that you just can't explore at the west end. But, if you are looking for musicals and straight plays you can find great ones at your local theatre thanks to touring companies.

Although touring companies may not have to same big set and lights as the west end, doesn't mean they aren't just as amazing. Touring companies face so many more issues than shoes that have their own theatre. Touring companies have to have set and lighting that can be adapted to different theatre spaces as well as versatile performers who can adapt to a new space each week, but when you watch a performance it is really about the performers and if they suspend your disbelieve than it doesn't matter about how realistic the set is. The true is local theatres and the west end are completely different and each have something different to offer its audiences. Both are amazing experiences but it's all down to audience preference.

Most feel that the training they have received within high school has really helped them to improve and evolve into a controlled and confident performer, although feel that they would have wanted to take lessons outside of school. Just this week two boys from year 10 in my school, who's only dance training has been within the high school, have gained places on Laban's CAT scheme. So clearly the training offered at high schools are at an exceptional standard.

Despite this, to get to a high performance standard, it's not just about the training you receive, but the determination and passion you have to work hard and improve. I myself have never had a singing, acting or dancing lesson outside of my school and was offered a place on the foundation Musical Theatre course at Laban because I have always stayed passionate about what I wanted.

Dance schools can be very expensive but those who have attended, credit there audition success on the performing arts education they received outside of school. Of course high school can only teach you so much but those who started dancing at the age of 5 have a greater advantage on those who started at 11 in high school. Obviously. Years of additional training are so important if you do want to make it in the business and it's the dedication of those who take extra classes to fit around there schedule are those who will excel in the future, and will get into the best performing arts schools.

Looking through the cast list in any programme for a west-end show or even a touring company such as Matthew Bourne's New Adventures, you can see exactly where each performer trained, flicking through do you see, university of Chichester, or De Montfort? No. you see the same pool of Conservatoires under every performers name, but why? Does training at a conservatoire mean you are a better performer than someone who trained at a University?

Many believe university student can of course find their way to jobs just the same as conservatoire trained performers, although they don't have the reputation of a conservatoires name working for them, if they work hard enough and are talented enough, that should shine through at an audition.

Of course having a training at a conservatoire will make you stand out at an audition from those who have trained at a University, but it won't guarantee you work. Not every outstanding performer can afford to go to a conservatoire and many will head to university as a cheaper alternative for their higher education training, but it doesn't have to limit your opportunities for work, recently I had a workshop with highly sprung theatre company and out of its members only one trained at a conservatoire, and all the performers had their own strengths and weaknesses but there wasn't a difference in the level of each performer, they were all as good as each other because of the hard work and commitment they have for their craft. There is always opportunities for performers to excel as long as they work hard and don't give up after knockbacks- talent will truly be the reason for you getting jobs not just where you train.

Although some conservatoires offer BA degree curses where a student can get a student loan like any other university, most still relay on students getting a DADA award to afford to the conservatoire they are accepted too, despite this only being offered to a select few applicants. But what about those who don't qualify for the award? Or even those who do qualify but just didn't get the award? Well unless your family has enough money for tuition fees of up to £30,000 a year, you can't go. Unfortunately, this is the harsh reality that effects so many potential students myself included, for my Foundation Musical Theatre at Laban the course was completely independently funded and after speaking to some of the students they are really worried about the financial situation their family is in for having to pay for their course. This isn't in the kind of situation anyone wants to be in and for parents who can see how much hard work their child has put in to get a place and not be able to afford to pay for it is heart breaking. Out of everyone I surveyed only one said they felt they could afford to go and after I interviewed them further they stated, "It would be a struggle, but I feel my parents would pay for it if I wanted to go they would get a new mortgage if they had to if it made me happy" but that isn't a reality for most families. Unfortunately this is an ongoing issue that won't be easily resolved, all we can do is hope that other conservatoires decide to switch to degree courses where student loans will be available for students, not only will it benefit students but also the conservatoires as they will be able to choose from a wider variety of performers from different backgrounds, giving more competition for places leading to more talented students attending as they will have more applicants to choose from.

"While three years at Rada or Lamda is a real advantage, a year or two with the NYT would work equally well for someone else. British drama training is probably the best in the world, and that's the reason that we've got such extraordinary stage actors."- Alistair Coomer, casting director at London's Donmar Warehouse

Going to a University or conservatoire aren't the only options, and might not be the best options for you, youth theatre companies are also a great way to train, but in the end all that matters is that you have passion, a drive to succeed and a talent for what you do, and you can get to where ever you want to be in your Career. (You just might have to work a bit harder than everyone else to get there) 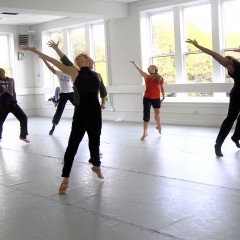 Does the performing arts have to break the bank?

As someone who's only form of training being from a high school, I feel passionate about the fact that making it in the business shouldn't be about how much money you have. Money doesn't equal talent but to pay for higher education it doesn't matter ho talented you are if you don't have the money to pay for it, you are not getting in. I feel passionate about getting underprivileged kids into the performing arts, but what's the point if they can afford to take their talent into a career.