Voice MagBlogsWhere are all the fe…

Underappreciated, undermined and undervalued are just some of the words that come to mind regarding the representation of female choreographers in the dance world. Women today have long been pioneers in dance, establishing companies and breaking new ground, but why are so many female choreographers not reaching the top spots within dance? In this essay I aim to answer this question in order to conclude why this is the case.

Ninette de Valois, Mare Rambert and Martha Graham are leading choreographers within dance history and set the foundations for dance we know today. Many female choreographers paved the path for dance and have left a huge impact on the world of dance, which makes it hard to believe that they don't get the same level of recognition as the male choreographers do.We have all these influential female choreographers, yet many companies follow the old tradition of ballet, the man created and then the woman dances. This is especially relevant to the Royal Ballet, no women have been commissioned to choreograph a main-stage ballet since the 1990s. Particularly with Ballet, there is a large majority of female performers, a lot of them go on to teach or lead as company directors. They just don't seem to be breaking through that barrier to get to the top, 2 out of the 12 artistic directors at the Royal Ballet are women. Vanessa Fenton when with the Royal Ballet wanted to be one of the choreographers, however her superiors would question as to why. Her work never went beyond studio performances, whilst her male colleagues were having their worked performed on the main stage. "I'd get a pat on the head from the director- 'well done, clever girl'- and that would be it". I think this is a very big issue, it is patronising and it undervalues the work created by women, it shows a lack of respect for her, because if she were a male then that response would've been very different.

This issue is not only specific to dance in Britain, in this last season the New York City Ballet performed 58 ballets, and not one of them was by a woman. In Moscow, the Bolshoi danced more than two dozen ballets this season and only one was by a woman. Also the American Ballet Theatre presented just one ballet this season for New York. "I realised that, being a professional dancer for 20 years, I had never performed in a ballet choreographed by a woman," said Tamara Rojo- Artistic director at the English National Ballet.

There is also the issue of the way in which female choreographers works are written about, compared to men. There was an association in 1998 called the Gender Project, it was formed by the choreographer JoAnna Mendl Shaw and a selection of other New York dance figures to study the issue. One of their findings was that even in modern dance, which is something that is largely pioneered by women such as Isadora Duncan, Martha Graham and Ruth St. Denis, men were still more likely to have their works performed and written about than women. I feel that this is because a lot of male led companies are performed on the main stages, most male choreographers have traditional technique within their work which is something that most people recognised, and this is common with choreographers such as Matthew Bourne, Alvin Ailey and Merce Cunningham.

I also asked multiple people around the dance department at my school to say the first choreographer that they think of. The majority answered with Matthew Bourne, which I think is more due to the fact that he is a big focus in our department, rather than the fact that he is a male. This research was ineffective because it was bias, however I do feel that dancers find it easier to name more male choreographers than female, I feel like this because there is a strong focus on male choreographers in the dance curriculum. 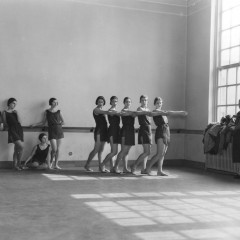 Where are all the female choreographers?