Voice MagBlogsHow to be Together

There's a lot more circus about these days, and a lot more clowning workshops - but I haven't come across that many troupes out there putting on 'classic' clowning shows for children. Not meta, not arty, not ironic, but embracing and revelling in the tradition of clowning, complete with tumbling, mad costume frills, silly hair and yes, red noses. This is what Acá Clowns, the troupe behind 'Better Together' do. The name is Spanish and the show felt continental – where perhaps this artform has retained more of a presence. But they are based in Kent so perhaps I'm reading too much into that.

The first clown appears at a bus stop, bloomers covering her bustle, and struggles to untangle her headphones. She says nothing. Clown two appears, a big ginger-haired man in hot pants and knee pads, his headphones already on his head. They are wary of each other. Clown three arrives; she is of tiny frame but with all her long hair stuck up above her head like a troll. She is the most lithe of the three and gets fairly tossed about by the others as they get in each other's way to consult the bus timetable, or try to get a satchel down from the end of a stick. They make odd squeaking noises but there is no intelligible dialogue; nonetheless we understand very well what they are saying to each other.

The storyline is this: three clowns meet at a bus stop and manage to miss three buses in a row because they are being silly.

But the show is about something, as well as being highly entertaining. The headphones at the start are significant; later smartphones and selfies come into play. The show is billed as being about friendship. Our three clowns are leery strangers at the start and pally chums by the end. But on the way there they have to deal with the things which get in the way of genuine communication – something which, as I understand it from my friends who have done some of those increasingly popular workshops – is intrinsic to clowning. At one point a huge beach ball gets thrown around the room. Obviously everyone loved this. And that notion of interactive, in-person play – it's capacity to bring us genuinely together - is again of course at the heart of clowning, and what ought to be at the heart of childhood.

Of all the children's show I saw at this year's fringe I found this one the most original and the funniest, and my 4 year-old son felt the same. Some of the children in the audience were fidgety – perhaps not used to the lack of dialogue in a show of this length, and the paradoxical subtlety of what was happening. But we really loved it. 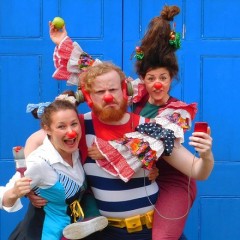 How to be Together