Accessibility in the arts is a constantly ongoing debate. Ellen Orange explore why she thinks art needs to be more accessible.

Last week fans at the American art and community experiment Burning Man made headlines for taking drastic measures to protest the new 'luxury' campsite which was being offered to wealthy customers. The fear was that the original ethos of building a community, engaging with the arts, and decommodification, amongst other things, was being lost with the influx of billionaires and celebrities from Silicon Valley. While the actions of the fans cannot be condoned, it has sparked debate about keeping art accessible.

It is the case with many arts events that, as they grow in popularity, they become more mainstream and increasingly commodified. This year was my first at the Edinburgh Festival Fringe, which first began as an alternative to the Edinburgh International Festival. While I very much enjoyed my time there, it was clear from the ticket prices and the audience demographic that it wasn't quite the alternative, 'edgy' arts space that I had been expecting.

It is difficult to know where to draw the line, as obviously artists can't work for free - like everyone else they need to make a living. Equally, we should support the organisations who host big festivals, and museums and galleries that run exhibitions, as many rely on ticket sale profit for funding. However, highly commodified concerts and festivals risk becoming exclusive and lacking in diversity when there are only a small proportion of fans who can afford to attend.

This movement towards the mainstream and lack of diversity can also stunt artistic growth and expression - especially when content is driven towards a particular market. For example, the once 'hippie' and counterculture ethos of Glastonbury has given way to the biggest names in mainstream pop music. While many people still enjoy this, it is evident that Glastonbury has moved away from its original form, now relying on big name 'headliners' to draw in crowds. This can become damaging to the industry, as smaller artists seeking exposure become marginalised when the focus is on acts people already know. It also drives the industry in a more homogeneous direction, reproducing the same music, art and performance that publishers and producers know will sell.

Where to draw the line will probably be an issue that we can never resolve, and may even be different for each artist. It is also unlikely that people will spend money going to events or festivals where they don't know the artist, causing a bit of a catch-22.

However, It is clear that the current trends of big expensive festivals and events is doing damage to not only accessibility, but also creativity in the arts. 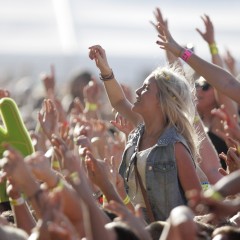 Accessibility in the arts is a constantly ongoing debate. Ellen Orange explore why she thinks art needs to be more accessible.