Europe is a diverse place full of art, particularly literary history. So if you are thinking of a trip to Madrid soon don't miss out these gems:

This street is the centre of the Barrio de Letras district, literally "neighbourhood of letters," due to the Spanish writers that have lived here. You will find quotations from Spanish literary legends including Miguel de Cervantes, inscribed on the pavement as a marker of this rich literary history.

Hemingway was well-travelled and a frequent visitor to Madrid and its restaurants and bars. Restaurante Sobrino de Botín, the oldest restaurant in the world, is mentioned in the final pages of The Sun Also Rises and is known to be one of Hemingway's favourites. Even if you don't fancy eating in, it is well worth passing by. Another Hemingway haunt was La Venencia, a popular sherry bar for socialist Republican soldiers and sympathizers during the Spanish Civil War. It is also a great tapas restaurant if you fancy a bite.

Miguel de Cervantes, author of Don Quixote de la Mancha, lived and died in his home in Madrid. You won't be able to enter the house but you can still see it with a plaque commemorating his life and death, alongside quotes on the exterior. You can, however, visit the Cervantes Birthplace Museum, a quick train ride away to see learn about his life.

The perfect little independent book store, run by ex-employees of the famous Shakespeare and Company bookshop in Paris, you will find a range of English, French and Spanish classics as well as a vintage typewriter where you can punch out poems.

There are plenty of places around the city where you can see the legacy of the Spanish Civil War, an event which inspired and involved many English-language writers such as Orwell and Auden, as well as Spanish writers such as Ana María Matute.

Las Cuevas de Sésamo is a cave-like bar that opened in 1950, known as another favourite of Hemmingway. Inside is an intimate cavern with walls featuring quotations from artists and literary figures like Miguel de Cervantes, Garcia Lorca, and Beethoven. A signed plaque from Hemmingway hangs on the wall in his memory.

While you may not have heard of Lope De Vega, he was a key figure in Tudor-age Spain, and is regarded as one of the greatest dramatists in Western literature. The house-museum of this prolific writer is on Calle Cervantes and he was also buried nearby in the church of San Sebastián. You can also find a monument dedicated to the writer in Plaza de la Encarnacion.

This theatre was first established as the teatro principal and dates from 1582, later demolished and rebuilt in the 18th Century. The theatre has hundreds of years of history and is still home to numerous literary works, so is well worth passing by. 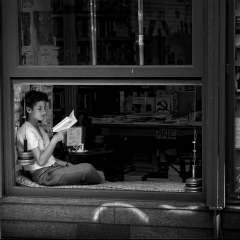