What motivates the change in character we witness when we attend a festival?

I'm not what you would call a natural Bear Grylls. I don't like camping, I have hay-fever, my music tastes are entrenched rigidly in the 90s and early 2000's, and then there is the irrational fear of flies. Yet, despite all of this, I still find myself coming back. There is a pull. Something invisible that seems to bring people from all over the country together for a shared experience. Likewise, I am not Mr Social. I've spent years in London, where talking to a stranger is the ultimate taboo, and from experience, other parts of the country are starting to go the same way. But that never seems to be the case at a festival. Why? 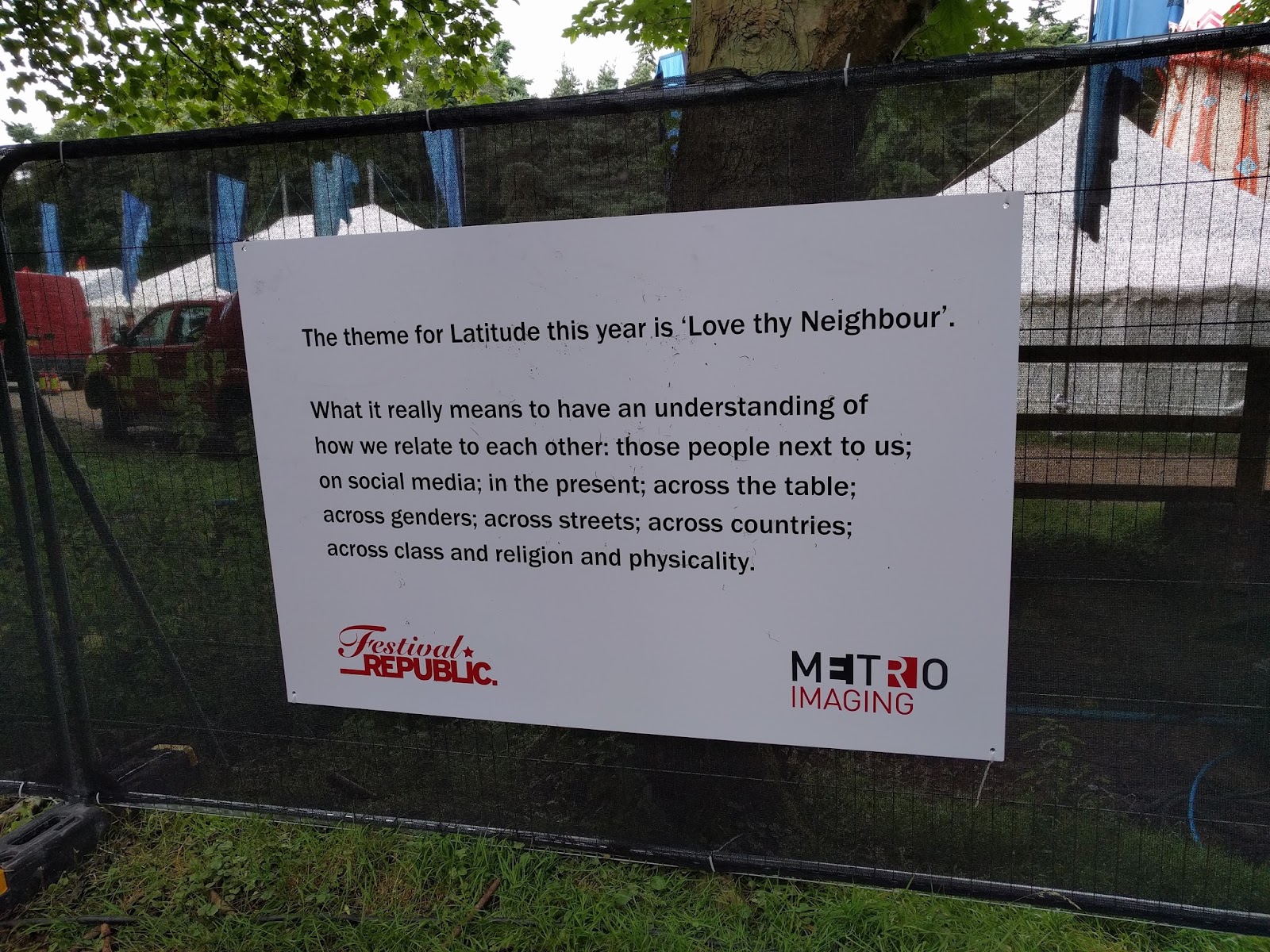 Upon my travels around the arena I discovered a sign that said that this years theme at Latitude is Love Thy Neighbour. Ignoring why a festival requires a theme, I started thinking a little bit more about festivals, and the festival goer. Specifically, it got me thinking more about how different the festival society is to that outside of the field.

Festivals are like a microcosm of society, and despite being predominantly middle-class, Latitude still brings in people from all walks of life to take part in a collective experience.

As I said, I live in London, and the thought of talking to a stranger is more than a little bit… unsettling, but within the first 10 minutes of arriving in the field I was asking a fellow camper for use of his mallet. It was a friendly interaction. I then had several more of these interactions from my tent to the main arena, and even more when inside. They weren't forced exchanges, or ones where you try to end them as quickly as possible by putting your earphones in and looking anywhere but at the engager. It's almost alien in today's society, but people actually want to talk to one another.

Even as I sit here in the press tent, I have other journalists talking to me - those who would probably otherwise have their head low over a laptop desperately trying to meet a deadline. That's not to say the environment isn't professional or stressful, but there seems to be a more comradery attitude. It's wholly alien, yet inherently familiar. It feels natural, yet doesn't come naturally in everyday life.

What motivates this change? Why does spending hours, no less days in a field, and sleeping between the muggy stretches of nylon transform us into more relaxed and cooperative beings?

Is this what Thomas More and Gerrard Winstanley had in mind when they wrote about their utopian society? Middle-class parents of two sipping a Latte and reading the Guardian/Observer, and teenagers who are desperate for independence but not trusted at a proper festival acting displaying their quirky and unique personalities by wearing identical ponchos and snapchatting every encounter - right up until they get no signal and suffer an existential crisis? I imagine not, but let's not forget that Winstanley's Digger movement lasted less than a year, Latitude has now been running for over 10. 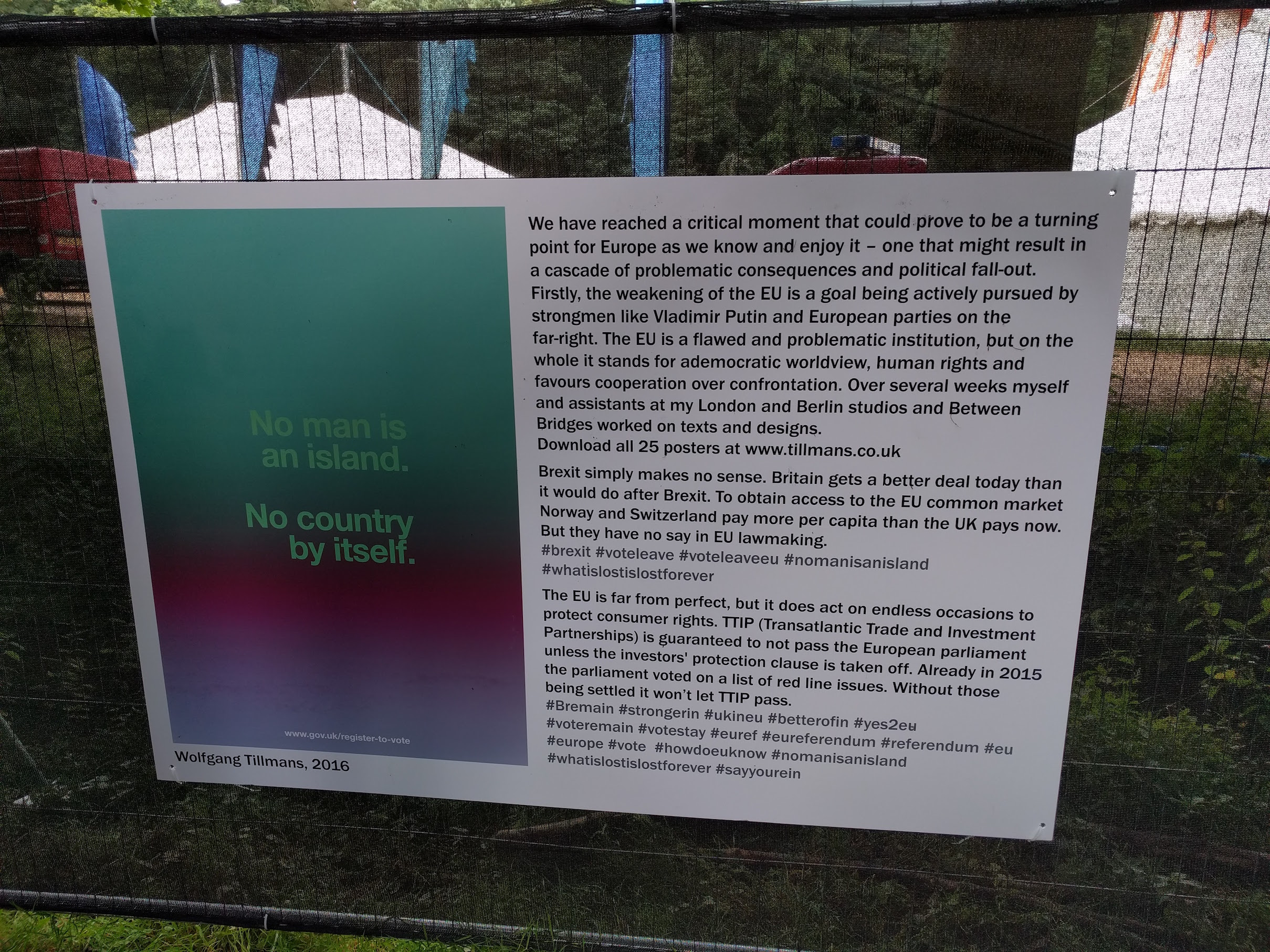 Obviously Latitude is a world away from what could be experienced back then, but perhaps we should not dismiss out of hand the assertions of these historical utopian thinkers who assert that humans seek a simpler life, free of stresses and complications.

The overwhelming majority of people aren't here to work, and the choice food is enough to sate most appetites, but it priced essentially the same across the board. Everybody is on equal footing. Similarly, all the events are accessible to everyone, regardless of status, class or income. Ignoring the potentially prohibitive ticket price, once you are at the festival you are almost certainly going to be seeing the same acts as thousands of other people, and there is something special about that.

Latitude is different from other festivals I have been to, and they know it. It's their USP. They are more spacey, more chill, and less about the hardcore music. They have poetry, theatre, literature, film, dance, comedy, cabaret and even art installations in the woods, in addition to the music they have on. And let's not forget the gorgeous Waterfront stage, which among other things, plays host to beautiful classical music.

There is a real buzz about the place, and it is infectious. Latitude may be slightly pretentious, and there may be an abundance of young people here, but that's good. They are all trying to find what makes them unique, making mistakes they can learn from, and engaging with culture that stops

I've just read this back - I've become one of them already and I've only been here a day - now fetch me a Guardian, Zachery! 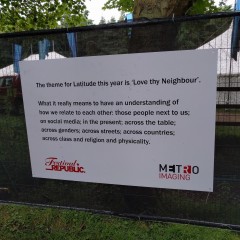 What motivates the change in character we witness when we attend a festival?