Voice MagBlogsA View from the Othe…

The history of a magazine and a mirror of the present

Summertime sadness calls for a dissertation break, and so I went to see glossy prints and magazine covers of British Vogue at Manchester Art Gallery. Or, at least, that was what I was expecting. Vogue, instead, is presented in this show as a historical document, a witness of different eras across a century. Every publication is emblematic of its period, but it's up to you what you want to read into it.

The history of the magazine in is structured in decades. The selected archive unfolds in a linear progression from the 1910s up to now. Different issues of the magazine are exposed alongside original pictures and prints. The exhibition is all about images. Colourful, black & white, giant, tiny, opaque, shiny, portraits.

Once upon a time…

It hasn't been always like this. The very first issue published in 1915 September 15th is an iconic symbol. There is no glossy cover, but a simple drawing of a puppet theatre and a sober title: "This Number a Forecast of Autumn Fashions". Two-Dimensional drawings were a characteristic feature in that period.

In the 1920s, fashionable figures were still drawn with a neat and elegant style by designers, such as Helen Dryden. The style is very similar to the one adopted by La Vie Parisienne, a pioneer French women's magazine first published in 1863. Vogue's design re-echoes the French mag, but they avoid over-filling the picture with ornaments.

Pictures, and in particular portraits, soon found their space in the mag. A very early portrait of Coco Chanel makes its appearance in late May 1923. But drawings are not completely forgotten: some sketches of her collection were printed in the features article. In bold, under her portrait, there is a caption: "Gabrielle Chanel whose designs are as youthful and chic as herself"

Bitter Fun Facts: What will never change in Fashion

Fancy dress - You might think that dressing up is just for children, or for university students. That's basically the same when it comes to fancy dresses. Vogue foresaw this in 1927, with an article titled "The Fun of Dressing Up". The article doesn't focus only on fancy dresses, but also on past trends. Oh well, retro was chic already in the 20s.

Cultural shocks – There is often the tendency to perceive new fashion trends as shocking. Yesterday, it was the swimsuit, today, who knows. In 1930, Vogue published the article "Beach suits become yet more informal". Black and white pictures of long hand-knit swimsuits fill the pages. What do you do when you can't see the colours in the pictures? It's easy; you get creative with the captions. The descriptions are literally colourful, like "heavy black jersey" and "colourful stripes". I promise, it's not a joke. It's real.

Beauty and Power Will – It is no news that women are blamed for their appearance. If you are not beautiful, you just haven't put much effort in it. A classic example is an article published in 1939: "Where There's a Will, There's a Waist". It's about corsets and how they can "support" you and make you feel in "control". Of course, who needs to breathe anyway?

Fantastic celebrities and where to find them

Innumerable celebrities were portrayed in Vogue during the past century. Hugh Grant, Robbie Williams, Madonna and Naomi Campbell are just few names. However, Kate Moss is one of the supermodels who appears most often in the exhibition. From her debut in the 1990s to now, her presence is no surprise. The real astonishment is to find Boris Johnson. The caption says "a rare beast" at the Olympic Park in the April 2012. Watch out. We might see him in the new Harry Potter film with Eddie Redmayne. 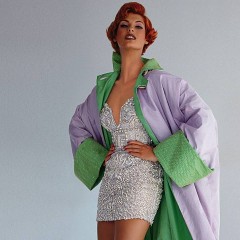 A View from the Other Side: Vogue 100, A Century of Style

The history of a magazine and a mirror of the present