Brexit from the view of an EU student

Sometimes, it is hard to process something that happens so close to you. Brexit touches me deeply as a European student in the UK. Friends and relatives expect me to answer back, to react and to break down. Many friends feel ashamed of the behaviour of their own country. Course-mates send apologies: this is not the country where they grew up. Neighbours joke about getting married to get back the EU nationality.

I am not in the position to give a response now. I agree with Philip Pullman when he says that we do need time to process something like this. We also need time before artists, writers and painters will try to make sense of it in their artworks. I have no time for a break down. I have no time to explore trauma through writing. I can only think about now and how Brexit is going to affect my future in this country.

I moved to England, because what I was looking for was here. As the Turkish writer Elif Shafak wrote: "London, with its cosmopolitan energy, urban memory, cultural openness, literary traditions, gender equality and freedom of expression, was everything I could not find in Istanbul." I moved from Italy to Manchester, instead, but the feeling was the same.

For a lot of people, it's still unbelievable that Brexit has happened. We strive to find someone that says it's only a bad dream. This astonishment shows us how much we have failed in understanding the collective consciousness of the country. But we need to face it now.

Of course, European funding for the arts will diminish. If we were complaining about austerity before, we can only expect more. European and British students will be seriously damaged by Brexit. Important exchange funding and programmes such as Erasmus + will be at risk. It's an incredible loss if students won't have the freedom to study and know other cultures anymore. Erasmus + was created to prevent this from happening. It is a way to enlarge communities and stop the construction of barriers.

What we saw three weeks ago with the EU referendum is that indeed there are many barriers. It is time for me to exit the student bubble now, and carry on the heritage and the spirit of the exchange programme. 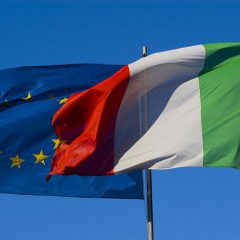 Processing the trauma of leaving

Brexit from the view of an EU student