Ladies, and gentlemen; I present to you a list of the many albums that changed my perspective on the world and made me the music nerd I am today.

This isn't just a list of albums that I really like - I'd end up crashing the website if that was the case. No, these albums have literally changed my life in a variety of different ways. Whether it be politics, personality, my career, or my view on the world - if they matter to me, they're right here for the world to see. Enjoy!

The best album from one of my all time favourite bands! I discovered this by accident as an obsession with the video game series Kingdom Hearts led me to scroll through fan-made videos on Youtube. But then I came across this video which played the opening sequence for the Birth by Sleep entry, with "Roses for the Dead" playing over the entire clip. As soon as I heard that opening guitar riff, my mind imploded - what was this? Why are their butterflies in my stomach? What is this thing of sincere beauty? I went from a gaming nerd to a music fanatic in a matter of 3 minutes, and I have not looked back since.

Interestingly, I first heard this band when I was 7 or 8 years old, but it wasn't until I was 14 when I re-discovered them, with "My Immortal" ending up on repeat on my iPod Touch. I still strongly believe it to be one of my favourite songs - with Amy Lee's haunting vocals and piano-driven melody balancing out with an epic alt-metal bridge that still grips me like a hug from an old friend. This album is a monument, and is Evanescence's best work - it's no wonder that they won 2 Grammys for Best Album and Best New Artist!

Now to introduce my transition into pop-punk - Hayley William's superb songwriting skills and charismatic vocals on the band's 3rd effort simply gave me ANOTHER band to obsess with. Whilst being more mature than their previous albums and arguably a forerunner to their eclectic self-titled 4th album, it made me really want to sing for the first time in ages, despite my pubescent squeaky vocals that made me sound like I was dying when I did try and sing. Did I care? Not in the slightest.

It's obvious the say that this is one of the most important albums of the 1990s - alternative teenagers around the world were finally able to speak their mind and completely change the music industry forever. For me, however, it acted as an opening to Kurt Cobain's state of mind, an emotionally troubled musician who was misunderstood as a child growing up, much like me, whose music became his voice as well as countless others. He became somebody that I could've related to. I still wonder what was really going on under all the fame, music, drugs and torturing success...

Can I scream?! Yeah! This monster of an album by the Swedish hardcore-punk band taught me a zero-tolerance attitude to life with style - it helped to revolutionise the genre by introducing different styles of songwriting and eclectic instrumentation that was pretty unique at the time for hardcore music - yet it still delivered that no-nonsense and blunt picture of left-wing politics that remain relevant to me even in this day and age.

Combining superb melodies with a metallic post-hardcore sound, it was almost like discovering Hours all over again! Charlie Simpson silenced the cynical critics when he and his new band burst into the world with with this outstanding debut. This is the album that made me want to become a musician - Simpson was able to fully reject his commercial "boy-band" image and become what was true to him - an authentic rock star. It made me realise that I should be following my passions and dreams, not just thinking about them and saving them for a rainy day.

This album blew my mind upon first hearing it - ironically, at that point I was going around chanting "Enter Shikari were rubbish!", and obviously I bit my tongue as soon as I heard the first two tracks. The album was a departure from their experimental debut, and dived headfirst into modern British politics and ripped it to shreds with electronic blast-beats and metallic guitar work that really gives the band a unique sound. Of course, their views have influenced my own views on the confusing world of politics, and I'm always grateful that bands like these exist.

For me, this is the definitive emo album of the 2000s. Some of you may be aware of my review of this album, but there's something much more personal that I can connect with when it comes to Brand New's third effort. Very mature and stylish, with a sprinkle of post-hardcore that brings it to life - this album kind of got to me, unlike other emo albums. Every time I hear it, I always feel this pang of doubt and sadness about the world around me. Jesse Lacey is an amazing songwriter, and he serves as my inspiration for dark ideas and expressing my fears.

Ah, the leading lady of this list. P!nk (a.k.a. Alecia Moore) has been a massive influence on me ever since I was a child, with her simple pop-rock melodies combined with empowering (and at times sensitive) lyrics that presented a strong and powerful female role model for many. This album stands as her best for me, with a diverse sound that suits her versatile raspy voice really well, I wanted to be exactly like her - strong, confident despite the flaws, and in full creative control of her career. Go P!nk!

Finally, the rebels of this list are Placebo. Their self-titled debut saw them rocket into fame and the faces of isolated teens of the 1990s, questioning their sexuality. What can I say? This album is punky, musically diverse, and confronts LGBT themes headfirst without shame. Placebo helped me to appreciate and accept my own sexuality with the power of Alternative Rock and androgynistic fashion. These guys are legends, and I have so much to thank them for.

So, what albums changed your life? What really changed the way you look at the world? What is the album that defines you? Let me know in the comments! 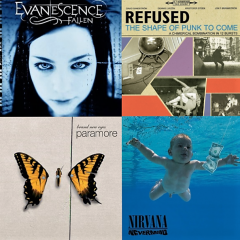 The albums that changed my life

Ladies, and gentlemen; I present to you a list of the many albums that changed my perspective on the world and made me the music nerd I am today.