But what to watch you may ask. Well, you have The Inbetweeners movie which has some incredibly funny moments, but you also have the classic American Pie 2 that still holds up. For those of you born in the early noughties you might not have heard about American Pie. It's basically the American version of the Inbetweeners, and the original gross out comedy. I can tell you that both movies are pretty much the same, it doesn't matter which you pick! Here are ten reasons why...

There's the awkward, brainy one who sort of the main character, the tall one, the one who's obsessed over his school crush and the one who always seems to be over compensating for something.

At the start of the movies, something hideously embarrassing happens to the characters when their parents happen to walk in. Ahem.

The hapless friends decide to go to a place where there's beach, babes, and booze to have fun and get lucky.

One of the characters finds out his school crush is at the same place and sets out on a quest to win her heart. In the middle of the film, there's a funny scene where one of the characters is caught naked holding their privates in public. Of course, the surrounding crowds point and laugh, as you do. There's a scene where one of the characters get into a really sticky situation where something disgusting happens. The less said of this, the better. The group go to this big ass party. The guy obsessed with the girl realises she's not all that and decides to go after the girl who actually wanted him.

Eventually they all find the right girls for them and all their Summer party dreams come true.

These are both great movies to remind you it's summer and have a laugh with your mates. Both have crude moments that are laughable and enjoyable, but American pie still holds up to date after 15 years. The scenes may be funnier in The Inbetweeners movie, but Stifler will always be remembered. 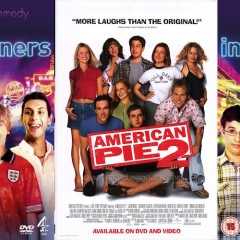 Deja-View: The Inbetweeners and American Pie 2