I'm Idriss, I'm a film maker from Birmingham. I've been working in film for around 6 years, doing various things; from music videos to documentaries. Even before I went to university I was filming and getting experience on projects. For a few years now I've been recognised as a professional filmmaker, able to produce and direct my own films and other projects nationally, but I'm looking to step up a level to improve my skills, while trying to make a positive change in people's lives.

When I was at school I never thought about going in film, I thought photography was boring and too easy to do, but I always had a passion for the arts. I enjoyed painting and drawing but was never that good technically with a pencil. Doing drama at school was a way for me to express myself and I saw myself going into acting. At college I did Drama and Performing Arts, as well as Media Studies and from there I realised I had a talent in media production.

I was eager to shoot things and get some material out there, but didn't have the confidence to actually just start. I kept pushing my ideas back until the point where I felt I was never going to make anything. After weeks and week of procrastination and lack of motivation I finally forced myself to do it. I asked my teachers if I could take out a camera, I asked my friend to act for me and shot my first ever video on a Saturday. It took a while but I managed to push myself to get it done.

Ever since that day, I've been eager to film more things. It was my first step into the industry and the most difficult one so far in my film making career. After that I began to volunteer to film events at college and helped out with everything film related that might get me a bit more experience.

From that moment I've learned to rely on myself for motivation, I know it's only me who can do that for myself. Sometimes there won't always be someone there at the right time in the right place to tell you the right things to help you make the right decisions, so if you really want to succeed in something you have to push yourself to get it yourself. Sometimes you might not even know you 100% want it, but taking that first step and trying something out will help you know for sure. After that, experience just seems to keep building on top, if you're willing to say yes.

It's can seem impossible to reach a certain path or goal, but if you push yourself enough and don't give up you'll make it through. It might not be to that exact thing you pictured, but you tend to find your way quite naturally once you begin.

Doing my Arts Award eventually convinced me to go to university and study film, but that wouldn't have happened if I hadn't pushed myself to make that first film.

Idriss will be on hand with Arts Award advice, in our Twitter Party on Tuesday 5th July 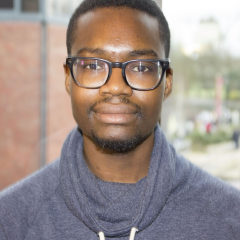 My creative past: Idriss Assoumanou