The EU isn't perfect, but voting to leave would be insanity

Burying the lede in journalism is seen as a bad thing, so I am laying my cards on the table right now. We need to vote to stay in the EU.

Voting to leave is a jump in the dark, a misguided and ill-conceived ramble into the mist of uncertainty, mist where vile and evil creatures prowl. Creatures like Boris and Farage. Sirens of Freedom, luring us into a false sense of security with their alluring songs of independence and global significance.

Get closer though and their relatability and humanity dissolve away, showing them for the mythical monsters they are; belonging to a bygone era. Holding onto nostalgic, outdated and jingoistic views of Britain as a great nation, able to survive in splendid isolation, while simultaneously securing favourable terms with everyone due to our sheer and unwavering importance in the world.

Times have changed though. Splendid Isolation is not a foreign policy that is tenable in today's global climate. We need to cooperate, collaborate, and communicate with others.

What we have now is not perfect. Nobody can legitimately stand up and say that it is. There are still some parts of the EU in dire need of reform to become more democratic, and money could be better accounted for. But equally, we could become more participatory, and willing to actually make the effort to engage with it.

How many of you voted in the European Parliament elections? Not many, I bet. Who knows who their MEP is? Could you describe the role of the Commission, or the Council of Ministers? Probably not.

We cry foul but don't understand the rules. We argue that the EU takes our money but ignore the economic benefits it gives back. We long for more Parliamentary sovereignty but generally hate our representatives, and view MP's as corrupt and self-serving.

"If you don't like your Government, you can vote them out" is a common argument presented by the Brexit crew. How quickly can you vote them out though? Once every 5 years. More to the point, our current Government was elected on less than 37% of the total vote. How is that democratic? Electing member of European Parliament (those who hold the unelected within the EU bureaucracy to account, and oversee all new EU Laws) are voted in using proportional representation - which IS democratic.

Speaking of our Government - do you trust them to protect the rights of workers should we leave the EU? Fair pay, guaranteed holidays, breaks, health and safety? None of those seem particularly corporate friendly, which means don't hold your breath they'll be sticking around.

Offering this referendum is one of the worst things Cameron has done, in my opinion. All he has achieved is the opening of the pandora box of racism and misinformation. Every argument dissolves very quickly into one about immigration. Every pseudo racist has come out of the woodwork, seeing this as a great opportunity to "stop the migrants" coming over here, stealing our jobs, using our public services, stretching our NHS to breaking point, ignoring conveniently how most of these things are vanishing or struggling as a direct result of the policies enacted by our national Government. Austerity is blame for your issues, not the migrants.

If you need more evidence of which 'side' to be on, look at those who want us to leave. BoJo, Farage, Wittingdale, Iain Duncan Smith and Michael Gove. Do you want these people negotiating the future of Britain if you buy into what they're peddling? IDS has been chucked from his own party once, and resigned this year after enforcing universally hated policies. Boris was sacked from his Government position and from The Independent. Farage needs no introduction. Whittingdale has completely destroyed his credibility with his handling of the BBC. Gove is the most likeable of the big names, and that's only on account of his insignificance and lack of presence. I don't even recall the last time I saw a news story covering anything he said. (nb. I saw just before publishing this that he did a Sky News panel - he can't guarantee jobs, and completely avoided the economy, focusing attention instead to immigration...)

OK, look, I get it. The EU isn't perfect. People have less money in their pocket and things are only getting tougher. The media love running stories about migrants coming into Europe (NOTE: Europe - not Britain) and make tenuous connections about how the two are linked. These Syrian 'migrants' are refugees, stuck in the throes of a heartbreaking humanitarian crisis - don't forget that. Don't dehumanise them as a simple statistic - a financial leak that can be simply patched up and forgotten about. And don't stand in line behind those that can look upon these humans with such disdain and expect them to have any more concern about your welfare.

The leave campaign have offered no concrete answers to anything - trade agreements, economy at home, security, immigration. That's because they can't. They don't have the answers, just ideals. There is no promise that the EU will work with us in the same capacity they will do now. Crying that the EU are 'bullying' us is pathetic. Why should they work with us more. We have constantly been an awkward partner, and may just give them the two fingers. The EU is a bloc, a partnership. You can't sell your shares in a company and still expect it to listen to you.

So let's do the only sensible thing. Vote to stay. This referendum is like somebody leaving their married partner of 50 years to chase a new and exciting 'conquest', only to realise that the young spry individual is chaste, unwilling to commit and actually hates us, and we are left without the house, the dog, or the recipe to that delicious macaroni cheese.

Basically, staying gives us a chance to work on the marriage. Leaving risks seeing Britain sitting in a pub, stinking of gin, waiting for an opportunity that might never come and spouting how great we once were to an uninterested bartender who is just waiting to clock off and engage in his modern world. 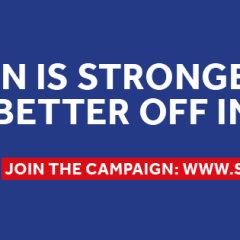 We need to stay in the EU

The EU isn't perfect, but voting to leave would be insanity