The teflon coated man does not impress me, does not speak for me, and does not fool me. I see through Boris Johnson, and I don't like it.

Is it over? Are we done? Can we return once more to normality?

I can't quite believe how crazy politics has gotten in the last few weeks. It's like a really badly written sitcom - a layman's The Thick of It, with everybody being overdramatic caricatures of sane people.

Have you ever heard of Goodwin's Law? It's the idea that if an online forum lives for long enough, the discussion will inevitably bring up Hitler - often in a referential capacity.

"You're literally Hitler"
"Well what would Hitler do?"
"The EU is trying to create a super state, just like Hitler did"

Oh, sorry, that last one isn't an example. That's a paraphrase of our ex-London Mayor, MP for Uxbridge and Ruislip, and lead of the Vote Leave campaign - Boris Johnson.

Good old BoJo, the everyday man. He's so clever, and funny, and self-deprecating. He's so exceptionally relatable, with his ruffled hair and bumbling personality - and not afraid to make Hitler references. He's a man that will get things done.

Except he isn't. To me, his verisimilitude is nout but a facade. A sham. Fictitious and phoney; a clever and calculated ploy to serve particular interests - and rest assured they aren't yours.

Yes, I called him clever, for he is clever. Not since Tony Blair have I seen a politician so in tune with the media, so able to spin everything into a PR opportunity. The man is literally teflon. Fired from The Times for quote fabrication, he immediately gets a job at The Telegraph, and gets paid a "chicken feed" £250m a year for his column. He was recorded promising to give the number and address of journalist Stuart Collier to Darius Guppy, who wanted to beat him up, yet wasn't sacked.

He was however sacked from frontbench politics for publicly lying about an affair which resulted in multiple terminations, yet somehow has still come back, fronting a national campaign to decide whether or not we irrevocably alter our relationship with the European Union. Why did he fall on Vote Leave? Jingoism? Unlikely. A legitimate belief that Britain will do better outside of the EU? I think not, for legitimacy is alien to him. To stick a knife in Cameron's back and climb up the metaphorical pile of bodies representing the fallout from the Conservatives ripping themselves apart over the issue? Feels closer to the truth. It is certainly opportunism that drives his every decision. He's lucky the public have a short memory, because otherwise they might call him out on his recent comments about Turkey, given how passionately he argued they should be accepted into "an expanded European Union" in 2006.

I take comfort in knowing at least that he has pretty much talked himself out of being the Conservative leader. The Hitler comments - a topic which only a few weeks prior got two Labour MP's suspended - has damaged his credibility, although again, he just seemed to glide on by. What I think will have damaged him is the dog whistle racism tactics he and the whole Leave campaign have utilised. Saying Obama is anti-Britain because of his Kenyan roots. Like, WTF. Seriously. Even aligning himself with UKIP, and the likes Iain Duncan Smith is doing nothing to his chances. You do have to question if you're on the right side of a debate when you're sharing a platform with Farage, Zac Goldsmith and John Whittingdale, to name the more prominent.

We shall see. At any rate - the most crucial thing you can do in the short-term is register to vote. It takes but a few minutes to do! 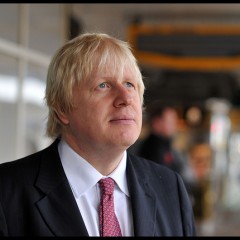 Boris Johnson: The man, the myth, the duplicitous clown

The teflon coated man does not impress me, does not speak for me, and does not fool me. I see through Boris Johnson, and I don't like it.