Just another Jane Austen adaptation? Wait a moment. Love & Friendship - released in the UK this May and directed by Whit Stillman - renovates the genre with a comic twist, a bold and assertive anti-heroine, and a focus on female friendship.

Whit Stillman's Love & Friendship (2016) introduces its characters in a very particular way from the start. The camera stops for a couple of seconds in a close-up for each one, a brief description appears aside their name. These few attributes give the audience a small hint as to what to expect next. This rather old fashioned method is a little unusual in contemporary films, but it is right for the mood of this period. This is how the audience gets to know Lady Susan Vermont (Kate Beckinsale), a beautiful, charming and manipulative widow.

Lady Susan's character was firstly created by Jane Austen. The eponymous Lady Susan is not so publicly known as her other books and it was published unfinished only in 1871, despite likely being one of Austen's early works. It has been approximately dated to around 1794. This epistolary novel is quite dissimilar to her usual style, with richly comic tone that is more marked than many of her others. In addition, Lady Susan is not the typical Austen heroine. She seduces married and single men to obtain what she desires. She doesn't hesitate when it is convenient to manipulate those who are close to her. She has a strong and assertive personality. She is always ready to answer back to accusations and justify her choices.

Stillman's adaptation of Lady Susan maintains these characteristics, but also enriches and builds on Austen's work. In an interview with Deadline, Stillman said that when he was writing the script for the film he had already Kate Beckinsale in mind as Lady Susan. The choice of the actress is particularly relevant, because the focus of the action is completely on her for almost the entire film. Love & Friendship strongly relies on Beckinsale's exquisite performance. She effortlessly acts as the clever widow, who plots to arrange an advantageous marriage for her and her daughter. She plays the role of the charming lady and the good mother, but she also winks to the audience who know the plot behind. Beckinsale's character is not the one who attracts the audience's sympathy. However, we can't help but laugh at her witty and caustic lines.

In Love & Friendship, Whit Stillman is reunited with another member of the cast of Last Days of Disco (1998), in addition to Beckinsale. Chloë Sevigny returns to collaborate with Stillman as Alicia Johnson, Lady Susan's best friend. In the film, the two friends are very close and keep informing each other of every new development of their plot. They often communicate by private sealing waxed letters, key elements in the film's narrative.

Methods of communications have changed very much since Austen's period. However, the assiduous exchanges between the two and their gossiping encounters are still part of the intimacy of some close friendships today. To reach out for her friend, Lady Susan embarks in long trips from Churchill to London. Of course, she has her interests to manage in London, besides visiting her friend. Nevertheless, she needs Alicia as her partner in crime and as a dispenser of advice. If Lady Susan doesn't consider marriage as an act of love, but instead as a chance for money, her behaviour is different in regards to friendship. She maintains her utilitarian behaviour with the people she calls friends only for her benefit. However, when it comes to Alicia, her approach is different, even if she never loses her cutting talk.

Among the other actors of the cast, Tom Bennett deserves a special mention for his performance. Throughout the entire film there is a pervading witty tone, but it is only because of Bennett's acting that Love & Friendship achieves its comic peaks. Tom Bennett is Sir James, the man who lady Susan has chosen as future husband for her daughter. Bennett plays the part of the ingenuous and remarkably stupid gentlemen. The other characters usually react to his lines with rolling eyes or visible astonishment for his silliness. Nonetheless, some scenes are irresistibly hilarious - watch out for his conversation about the existence of the Twelve Commandments.

This vibrant comedy is very enjoyable and is offers a rare slant on period films. It gives additional value to Austen's adaptation genre together with the unusual main female character. Costumes and the settings are well chosen and recreate the atmosphere of the period. We must not forget that it is a work of fiction and as such it should be considered. Women's costumes are stylised to make them more appealing for a contemporary audience, compared to the dresses of the era. In addition, what we could mistake for London and the British countryside is actually Dublin and its surroundings. Both choices are not literally faithful, but they work in the fictional context of the film. Love & Friendship gives back freshness to period films.

Love & Friendship will be released in the UK on the 27th of May. 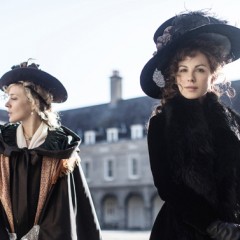 Just another Jane Austen adaptation? Wait a moment. Love & Friendship - released in the UK this May and directed by Whit Stillman - renovates the genre with a comic twist, a bold and assertive anti-heroine, and a focus on female friendship.