Voice MagBlogsDoes the future of b…

Those in favour of traditional 'high art' - such as painting - often see design as something separate. However, it is becoming clearer and clearer that the boundaries are blurring with the growing concept of animation on book covers.

When you think about it, it is somewhat surprising that this is not already more widespread on tablets and e-readers, since they already have the technology to support animation and even video, particularly in tablet form, which offers video playing features. Even more so, the rise of simple moving images like gifs, which are smaller files than full blown videos, will surely make it a very real likelihood that we will soon start seeing our book covers as animations rather than just static images.

So far the challenge has been that even if a tablet supports this technology, the traditional form of file and software to read it doesn't, and since those interested have largely turned to apps to make interactive material, particularly children's books, there has been no rush to update the technology. Apple has also been ahead of the game on this one, animating classics such as The Tiger Who Came to Tea, but again this is limited to children's books. However, progress is being made, and although it would seem slow it is still less than ten years since the first kindle e-reader and less than 5 since Amazon released their first kindle tablet, historically speaking it's early days yet. There have also been significant examples of this design from top publishing houses like Hodder and Staughton, while individual artists appear to be paving the way with digital artist Henning M. Lederer having animated 50 scientific and factual covers from the previous century (shown below). It is clear that the seeds of this design have been planted, we just have to wait for them to grow.

Far more surprising however, is that it appears to be the paperback market which has got there first, with Vintage Books publishing a series called Vintage Futures, where the simple but striking designs are animated with a sheet of acetate, which comes supplied with the book. This is the exciting early development of a phenomenon which could completely change the face of book cover design. New technologies - like the idea of 'plastic computers' - are making it easier to put simple technology such as changing lights on to labels, so why not book covers. It is highly likely that these technologies will see dramatic advancement in the near future, making animated paperbacks a real possibility.

Why is the idea of animated book covers or illustrations so interesting? For one, it will be the biggest leap in book cover design and marketing potential since Penguin's innovation in the last century. Imagine bookshops filled with moving covers. But more importantly it allows a huge integration of different types of art forms, and as in many of these examples, technology is integral to the art, not just putting the art into a design. 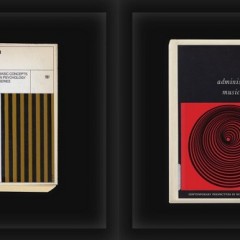 Does the future of book covers lie in animation?