Claire Fuller is the winner of the 2015 Desmond Elliott Prize for debut novels, with her fairy-tale thriller Our Endless Numbered Days.

The discussion begins with a lot of joking about how difficult this novel is to discuss without spoilers and I become worried as I am one of the few people in the audience who hasn't read the book (they did a show of hands to name and shame!).

This was Fuller's second event at the Festival after attending a book club session yesterday, and she comments on being surprised at the reactions of her readers and how much they want to believe the story - it becoming more and more clear that there is a big plot twist.

The story is about a young girl taken to a remote forest in Germany by her father, and is narrated by the girl as a teenager reflecting on this. Fuller is keen to stress that it is less about what happens to her than how or why, and that the surprises were almost incidental to the storyline. When reading an extract from one of the forest scenes it is beautiful, vivid writing which really evokes this natural but also dark and ethereal setting. Where did she get this from? Research says Fuller. She extensively researched the details of her setting and the idea of survivalism, which is was motivates Peggy's father. Set in the 1970's the book is heavily influenced by the Cold War and very real fears about the end of civilisation. This amalgamation of different ideas and almost different genre's is fascinating, and it clearly works.

Unlike other novelists I have heard from who talk about mapping their stories, Fuller doesn't plan, instead preferring to work out the plot through writing, including inspirations from her own memories and experiences, or other media that gives her ideas. She enjoys the idea of being able to play with the reader, claiming that she is a gullible reader, so it is clearly enjoyable for her to reverse that relationship. Did she think about the genre when writing? No, it was more about including specific ideas and inspirations.

When questions came from the audience they focused around current popular techniques in novels, from narrators who don't understand the world around them, a trait the book shares with Emma Donoghue's Room, to the use of flashbacks. I was getting worried I had waited to long to ask my question about the fairy-tale element, and was incredibly grateful when someone else brought this up. This aspect actually came from Fuller's book club who commented that you can't really set something in a German forest without recalling the Grimm brothers, and includes peppered references from a number of different traditional fairytale stories, which clearly work well alongside the childhood reflections of the narrator.

Overall Fuller's work sounds intriguing and exciting, and with another book having been purchased by Penguin, and the third one in the works, Fuller is clearly a talent to watch out for. 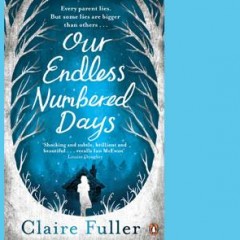