Sebastian Faulks gives a rare insight into his life and work, as well as his most recent book Where My Heart Used to Beat.

This event was clearly one of the biggest of the festival, taking place in Forum which not only offered a much bigger venue but was packed. This was confirmed by interviewer Elizabeth Day who tells us that Faulks doesn't often do festivals so this is clearly a rare opportunity.

We begin hearing about Faulks' interest in the war and he describes how his father and grandfather had each fought in the wars and how it almost came to be expected that he as the next generation might too. It is clear that though not autobiographical, his work is inspired by this family history, setting a number of his works, including his recent book Where My Heart Used to Beat, in the periods of the World Wars. The conversation moves away from his novel to his general experiences of living in Paris and Elizabeth Day mentions that his novels have a European feel. Faulks contrasts this to the Japanese novelist Murakami, who he is currently reading, and jokes that 'fish fall out of the sky' in these novels, they are so drastically different.

Picking up on this theme we dive into politics with Day asking how he feels about the EU referendum. Faulks laughs commenting that he should vote rationally with the grown ups to stay in, but that the hooligan in him is tempted to see what would happen. Becoming more serious he points out that the EU has been an incredibly important stablising force and one that has, as yet prevented the third war he referred to previously. He remains evasive however deflecting the question when pressured though maintaining that he is immensely interested in it.

The discussion moves from this to another current news item, the move from The Independent to go go digital only, to which Faulks responds that this is sad because journalism helped him to develop his writing as a novelist. He disputes the traditional saying 'write what you know' as terrible advice and comments on how he started out doing the opposite because he believed everything had to be invented. This is incredibly interesting when he comes to speak about Engleby, with the main character Mike Engleby a unreliable narrator who proves to be a problematic character to say the least. We are told that this is the closest the author has come to anything autobiographical, though Faulks maintains there was no seepage. He talks about researching personality disorders for the character, and taking on line tests for this as Mike Engleby and himself, a confession which is received with nervous laughter from the audience until he reveals they scored very differently, clearly aware that he was playing us!

A question from the audience sparks discussion on the author's experience writing the works of others, for example, the most recent Bond novel and also Jeeves and Wooster. He seems to have enjoyed these experiences, noting that each came with different difficulties but when asked if he would do it again he jokingly recalls an old phrase 'the first time is funny, the second is silly and the third deserves a smack!'

Even just in speaking Faulks is an engaging story-teller, manipulating our expectations and inciting a reaction on even the smallest anecdote. His discussion ranged far beyond his novels, which was helpful to those who weren't as familiar with all of his work, and since it was such a rare opportunity to hear him speak it was fantastic to hear insights into his work and his craft. 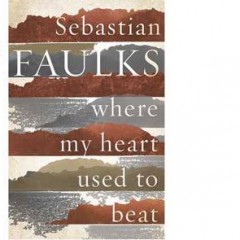 Sebastian Faulks gives a rare insight into his life and work, as well as his most recent book Where My Heart Used to Beat.