For my Gold arts award I am required to share the view I have on something in the arts publicly. I thought this would be the perfect place to share this

When asked to write about an issues in the arts, the issues that I chose, is an issue that has followed me around ever since I decided that I wanted to become an actress. When decided that I was going to study acting in college as a BTEC there were people in my life such as high school teachers and class mates who tried to change my mind because they obviously thought acting was the easy option and doesn't take much effort. Even after i'd gone away and done extras work as a start into my career they still didn't believe that it was something I could do.

When it came to choosing my options in high school i was limited for choice as I didn't know what I wanted to do at that point in my life. Yeah i knew that I wanted to be an actress, but my school didn't offer drama as a GCSE so that was out the window. Fancy asking a 14 year old to make a decision about their life there and then! People always told me I needed a back up plan and that was the thing, nothing else interested me so how was I suppose to pick a subject I had no interest in taking or doing anything with it in later life. i'd always had a passion for acting had done the occasional extras job whilst I was at school (after they finally signed the forms and agreed for me to have the time off school, but thats a whole different rant!!) but whenever anyone asked me what I wanted to do when I was older, I always gave the same answer of 'I don't know' or 'something to do with english' because I never wanted to admit to people I wanted to be an actress because when I had told people in the past I always got the same reaction. they'd pull the 'reallyyyyy' face and then either wish me luck in an unconvincing manner or tell me how unrealistic it was and that it was better to chose a back up plan. Once i'd applied to college and more and more people found out that I was taking acting, I got the feeling that the people who had chose A levels would look down on me for choosing the 'easy way out' In my opinion acting is most certainly NOT easy. ever since I started my course in September I first handedly seen how hard acting is. not just because of the obvious reasons of late night rehearsals, remembering lines and numerous shows a week. But also because of everything else you need to remember. for example techniques since September 2015 I have learnt about three different practitioners that all bring a different aspect to the way you chose to act. Each of their techniques are most fitted to different shows, so when it comes to doing a show, you as an individual performer have to decide what techniques are more fitted and apply that.

I recently read an article in the guardian when I was researching for this issues. which stated 'film acting is the least skilled of all the performing arts and the that needs least training' and that 'film actors are vastly overrated' they talked about how an actor can look at door and rehearse 10 times, just looking at that door, which something I can agree with because sometimes you can see an actors performance and they've become so used to do something that particular way in rehearsals without taking risks that it looks overdone. They also make the point that actors perform better when they haven't acted before, which is something I can partly agree with because you do get people who have trained in acting and this is obvious in the way that they perform but I think this is becoming quite rare, because less and less actors are doing that whole stage school thing.

My main problem with the article is how they use these sweeping statements, the man who wrote this article is just a journalist, its obvious that he hasn't done a lot of research in the little amount that he has written. He talks about how he thinks there is little to learn, when in fact if he went and did an acting course he would be shown how untrue this is, within minutes of the class starting. He thinks that it needs the least training but many courses you join in college are two years long and university its 3-4, which is usually the same amount as dance, and singing and all the other art courses. In the two year courses I have done at college, I have learnt how to perform Theatre in education (TIE) and what the difference between that and Theatre for children is, I don't know this writer but I'm sure he couldn't tell me this. Ive learnt about physical theatre and practitioners who specialise in this, like comedia and spent a whole term just focusing on then so that I would be able to able this knowledge when we did mask work. Although all of this was then presented on the stage, these are skills that I'm going to take away with me, and something that will make me stand out and hopefully give me an edge above other actors going for the roles I am. We have also done screen work and straight away learnt how hard it actually was, you don't just do one scene and then you're done like stage, each scene has multiple shots which takes longer, you have to be more subtle and each thing means something to each viewer, whereas with stage, you do something and everyone gets exactly what its suppose to mean.

Another article I found was an article about Kurt Russell, and in this he has admitted that he 'doesn't think acting is difficult' he talks about 'you don't have to be gifted to hit a mark and say your line' which I agree it doesn't, it doesn't take much to sit at home learn your lines and then show up the next day and do it, but thats not all there is to acting.

I agree that you don't have to be gifted to stand on your mark and say a line, the thing I disagree with is that, its not just standing on a mark and saying your line, because if you think of it in that way then to me you're a selfish actor. if your just going to work, with your lines learnt and then just doing it and being done then you're not doing the job properly. there are other people in that scene who have probably gone away, looked at their lines and thought about many different ways to say these lines that would then provoke, or suppose to provoke a reaction from you as their costar, and if you're just thinking about saying that line then you're not thinking about the others around you, in my opinion anyway.

In conclusion I think that people who think that 'acting is easy' need to learn a bit more about the career before they make these comments. I admit that when I was younger I thought that it was about learning lines and saying them, but after training and learning the skills for the past few years, I have had my opinion completely changed. When it comes to other peoples subjects I don't make comments because i think that every trade has its difficulties. 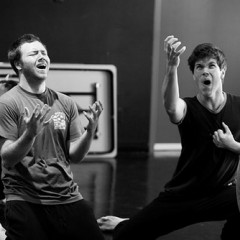 For my Gold arts award I am required to share the view I have on something in the arts publicly. I thought this would be the perfect place to share this