In the next few months, a number of empowering events for women will take place in Manchester. Does gender equality begin on a local level?

Tomorrow will be the last day of the Vagina Monologues, hosted by the University of Manchester Student Union at Academy 3. It is a brilliant production based on Eve Ensler's interviews with women from different cultural backgrounds. The initiative is by the Women's Campaign of the university, who hope to give young women the possibility to speak up. If we want to raise awareness, what better way than by narrating witty and poignant true stories? Local sexual and domestic abuse charities will receive the money raised from the tickets and during the shows.

It's not just uni students who are getting involved, other independent venues are hosting innovative projects for empowering women. The Curse debuts on Thursday 10th March at Manchester's Three Minute Theatre. The Curse is a feminist play by Jane Bradley, a fiction writer and founder of For Book's Sake. The play doesn't just concern the experience of being a girl. It also explores problematic issues (such as mental health) and directly addresses teen sexuality and menstruation. It's great to see these subjects out in the open.

Reclaiming women's bodies is also related to protecting them from psychic and sexual abuses. Feminist march, Reclaim the Night is also held in Manchester this month, on Thursday 25th. The march is organised by Jess Lishak and a huge group of volunteers. This year, the Pankhurst Centre has also been involved in the initiative. Marching down on Manchester's streets is a way to reclaim more security and protection, but also a good chance to get creative with glitters and banners in preparation to the march. It provies a great inspiration also for other students and young women in the UK.

For the first time, Women In Media Conference will be also be hosted from 4th until 6th March at the Antony Burgess Foundation. It's organised by the Manchester Media Group, born from the collaboration of the student's newspaper, the radio station and the TV station of the University of Manchester. Initiatives like this one are very important to connect with fellow students, who share similar interests for the media. It is a chance to inspire and be inspired. Budding young journalists, producers and presenters can mix with more experienced figures in the media.

Opportunities that celebrate and encourage gender equality at every level need to spread out in the whole country. Manchester is a fantastic example of how young people can show initiative and get involved. Gender equality is something that concerns everybody, let's start from our local community.

If you want to share similar events in your area, we will be extremely happy to read about it in the comments! 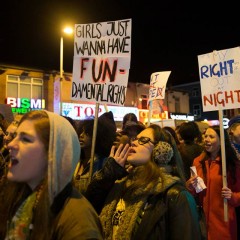 A view from the other side: Manchester takes a stand for feminism

In the next few months, a number of empowering events for women will take place in Manchester. Does gender equality begin on a local level?