To honour his 104th birthday anniversary, I’m looking back to the life and work of one of the greatest artists of our time.

Leonard Bernstein was a composer, conductor, music educator and pianist born on August 25, 1918, in Massachusetts, United States. The first child of Ukrainian-Jewish parents, Bernstein’s love for music began at a very young age. When he was ten years old, he taught himself to play the piano and even the basics of music theory. Soon, he became interested in all areas of classical music; every summer, he would gather his neighbours to recreate operas and was able to play many of Beethoven’s greatest pieces.

Throughout his childhood and early teen years, Bernstein took lessons with several teachers. By 1935, he attended Harvard College, where he grew as a composer and piano player. During this period, Bernstein was greatly influenced by his aesthetics professor, David Prall. Prall’s lessons would forever inspire his vision of the arts.

Life as a conductor

Bernstein graduated from Harvard with honours in 1939. Soon, he enrolled at the Curtis Institute of Music in Philadelphia, where he continued his journey to become a conductor, receiving lessons on piano, orchestration and conducting from some of the biggest names of the musical scene at the time – like Fritz Reiner and Isabella Vengerova.

On November 14, 1943, Bruno Walter, the New York Philharmonic conductor, fell ill on the day of the orchestra’s presentation at Carnegie Hall (New York). Leonard Bernstein, who had recently gained the position of Assistant Conductor, was asked to replace Walter that very same day. Unexperienced, with no previous rehearsal with the orchestra, and with four very difficult pieces to conduct (the program went from Schumann’s Overture to “Manfred”, Op. 115, to     Wagner’s “Die Meistersinger”), the concert was a success. Bernstein gained his first standing ovation and the “big break” to a very prolific career as a conductor.

During the subsequent years, Bernstein got involved in projects with orchestras across North America. By 1944, his conducting career merged with his career as a composer with the premiere of “Fancy Free” (directed by himself on its European premiere at the Royal Opera House, London), a ballet composed in collaboration with Jerome Robbins. After the success of their work, both artists decided to transform the ballet into a musical (finally called “On This Town”), which premiered on Broadway on December 18, 1944. Eventually, the musical became an MGM motion picture starring Gene Kelly and Frank Sinatra.

From 1945 to 1946, Leonard Bernstein became the music director of the New York City Symphony; 1946 saw the year of his overseas debut with the Czech Philharmonic. But his overseas collaborations extended from Israel, where, in 1947, he conducted the Israel Philharmonic Orchestra, to Milan, becoming the first North American to conduct at La Scala in 1953.

By 1958, Leonard Bernstein had become the conductor of the New York Philharmonic. On January 18, his first performance with the orchestra also became the first of the Young People’s Concerts of the series to be televised. Bernstein’s charisma and love for music made the broadcast an immediate success. With engaging lectures and exciting repertoires, he continued to conduct a total of 53 programmes.

Bernstein’s passion for conducting was certainly contagious. A 9-year-old Marin Alsop attended one of the concerts and was forever inspired to become a conductor. Later, she would become one of his dearest students.

Bernstein’s career as a composer was just as successful as a conductor. Many of the all-time classic musicals from Broadway are of his authorship. Probably his most acclaimed one, “West Side Story”, was written simultaneously with “Candide” (a musical in operetta style). Composer Jerome Robbins joined as a choreographer and director, Arthur Laurents as a book writer, and Stephen Sondheim as a lyricist. A retelling of a modern (as in the mid-1950s) Romeo and Juliet, the musical was performed 732 times from 1957 to 1959. Today, it continues to be performed, adapted or referenced. Last year, in 2021, Steven Spielberg directed the second film adaptation of the Broadway timeless.

By the early 1980s, Bernstein composed his second opera after “Trouble in Tahiti”, “A Quiet Place”, a sequel to the first one.

Apart from musicals and operas, Bernstein stood out with instrumental works, like “Serenade after Plato’s ‘Symposium’” for strings and percussion.

By 1971, Leonard Bernstein became the Charles Norton Professor of Poetry at Harvard University. Among his responsibilities, he had to deliver six public lectures in 1973. The first one, on October 9, explained the importance of understanding music -and every other discipline- in the context of another discipline. And this is why, throughout the lectures, he drew analogies proposing his observations from an interdisciplinary point of view. Bernstein decided to name the series of lectures "The Unanswered Question" after a piece from Charles Ives. As atonality was impregnating contemporary compositions, Bernstein wondered about the future of classical music. Ives' "Unanswered Question" was interpreted by Bernstein as "whither music?"; in a context where atonalism and serialism are taking over, what will the future of classical music be?

Despite receiving some negative criticism, the Harvard lectures made some of the most complex terms and notions of music accessible to the general audience.

From philosophy to aesthetics to musicology, the Harvard lectures covered a wide range of topics, all relating to music from different aspects. They are quite possibly the most engaging way to understand one of the most complex debates of the classical music scene over the last century.

Produced by Martin Scorsese and Steven Spielberg, Leonard Bernstein’s biopic "Maestro" is set to be released on Netflix in 2023. Bradley Cooper, director of the film, will also be playing Bernstein, focusing on his work when the conductor married Felicia Montealegre (a Chilean-American actress).

Leonard Bernstein’s legacy lives on, and he is remembered for his love for music and passion for sharing it with everyone, making it engaging, fun and accessible for all. 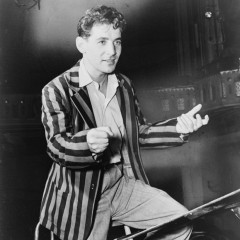 To honour his 104th birthday anniversary, I’m looking back to the life and work of one of the greatest artists of our time.