Voice MagBlogsLife Is Yours - How…

Last weekend, the UK saw temperatures soar as high as 31 degrees. It also saw the timely release of Life Is Yours, the new and summer-fraught album from indie heroes Foals. Despite having recently been made a trio by the departure of keyboard player Edwin Congreave, the Oxford lads have certainly not scaled back on energy with this record.

Opening with synth-driven title track Life Is Yours, the album immediately provides a sense of reassurance and affirmation, combining upbeat rhythms, grooving basslines, and a sprinkle of cowbell to accompany the lyrics “life is yours / your life awaits / the choice is yours, don't be late / escape your fate and break away” that remind you of the power you hold as an individual. Whilst it can be easy these days to feel overwhelmed or doomed, the themes of the track take a stance that echoes the principles of existentialism – whilst things seem to be going wrong on a grander scale, we can create our own purpose. Life is yours, make what you can of it.

The rest of the album follows a similar path, remaining consistently upbeat and optimistic through its 41-minute duration. This feels like a different direction for Foals, and an improvement on the nihilism of 2019’s double album, Everything Not Saved Will Be Lost. Even the album titles feel like a contradiction of one another, progressing from an ill-fated outlook on the world to a much more invigorated and inspired position. It certainly feels like a stark contrast, considering the transformation from the bleak and pessimistic murmur of I’m Done With The World (And It’s Done With Me) from the 2019 release to the overarching exhilaration and positivity that is adopted in the wake of this release.

Surprisingly, this shift developed throughout a harsh winter spent in lockdown, with frontman Yannis Phillipakkis stating “We worked quietly and privately in a bare white room off a deserted road, no seats or windows, just our own vibe. We brought all the colour and optimism in that void of time”.  Painting a real vivid sense of summer, this certainly feels like their most colourful album yet, and it certainly achieves in bringing a sanguinity to the season.

Sonically, the album takes a much different approach to what might be expected of Foals. They’ve ditched their rockier sound for an homage to disco-funk, whilst still incorporating riffs and build-ups that are famous for being integral to their live sets. This feels like an incredibly intentional move from the band, providing a life-affirming and dance-inducing soundtrack for a new era of life as we continue to move forward from the perils endured over the last couple of years. As with any Foals material, I think this is truly music to be listened to in a live setting, and the stacked schedule of tour dates that the trio are gearing up for to see out the year further reinforces this idea.

The reception of this record has been largely positive; whilst some fans long for a return to the heavier material, the general consensus is that Foals have absolutely delivered what the world needs at this moment. There are definitely allegiances drawn in the new album that ties to their old material, with closing track Wild Green falling reverent to the roots of math-rock that founded Foals to become the band they are today. It feels like an acknowledgement of their 2008 debut, Antidotes, without trying to replicate it in a way that could feel out of place. Similarly, Wake Me Up flaunts a synth melody reminiscent of Talking Heads’ Once in a Lifetime, and Flutter feels as if it could have been a reimagined iteration of something written by The Black Keys.

Undeniably, Life Is Yours is a progression of Foals’ career that may not have been forecast, yet feels like an absolutely effortless advancement. The upbeat nature of this record almost overshadows their previous release, diminishing the edgy, nihilistic approach that now feels as if they tried a little too hard to be cool. This album feels like a return to form for the band, as they continue in a direction that steers them towards writing rosy, anthemic bangers, redolent of the success brought to them by other songs of that ilk.

Life Is Yours is a life-affirming record guaranteed to reinvigorate and refresh. Breathing strident energy into a time of regrowth, it feels as if Foals are pioneering an essential rise in morale. For now, the era of contemplative music is over; it’s time for celebration, dancing, and a great lift in spirits from all. 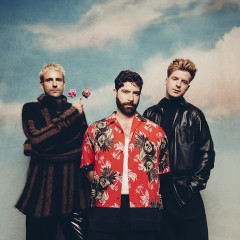