This will make you cringe, from electro-jazz to Andrew Lloyd Webber – here’s our top 5 most bonkers UK Eurovision entries

Eurovision 2022 is fast-approaching, and the big question this year is whether the UK has done enough with Sam Ryder’s ‘Space Man’ to make it to the top 10. It’s one of the bookies' favourites to top the leaderboard, which is something that no-one has heard in a very long time. The UK is notorious for not having the best track record with the Eurovision Song Contest. You can blame it on the politics (Brexit has been our most recent excuse), cringe song concepts, or just the acts themselves. Here’s a look back at the UK’s most bonkers entries – fair warning, the majority of them are catastrophically yikes.

Let’s set the record straight, ‘It’s My Time’ isn’t a bad song whatsoever. Jade Ewen has stunning vocals, but the one part of the performance that is just so unexpected is seeing Grammy-award and Tony-award winning Andrew Lloyd Webber on the keys at Eurovision. Obviously, Andrew wrote the song but I don’t think it’s necessarily predictable that he’d be there lapping up the limelight and letting everyone know it’s his time too.

Again, not a terrible song, it’s actually  iconic. How many people knew this upbeat bop originated from Eurovision? It’s a school disco classic. In the actual Eurovision performance, the dancers are putting their entire souls into portraying high energy and we all live for it.

Speaking of school discos, who thought school was a great concept for Eurovision? This is one of those entries where you wish you could unsee it. Daz is so misplaced in this song, and he’s the lead singer on it. Not our best.

Close your eyes. Listen to Jemini’s ‘Cry Baby’. You’ll soon realise that the first 10 seconds are messy to say the least. Harmonies are all over the place, none of the notes are sung in tune. One of the lyrics is ‘lie to me baby’ but who lied to them and said that they sounded cohesive? This might’ve not been their fault considering no-one got it right at all, potentially the instrumental they were hearing might’ve been in the wrong key. However, safe to say this will not be in any close proximity to any Eurovision playlist.

Flight from euro-pop hell. This one’s turbulent, to say the least. Sleep paralysis demons dancing whilst dressed as flight attendants in red, white and blue. That’d be Schooch with ‘Flying The Flag’. A song full of innuendos (genuinely, search the lyrics up) and an overload of cheese. Truly the pinnacle of cringey UK entries, however this song gets upgraded to first class because it doesn’t take itself too seriously and is a great laugh. Plus, you get a lifetime of the ‘bap ba-da, bap ba-da’ tune on loop.

Electro jazz? From the UK? On the Eurovision stage? It shouldn’t work, and it doesn’t work. However, Electro Velvet ‘Still In Love With You’ is a memorable watch and kind of catchy. It definitely has some questionable lyrics like ‘Don’t stay out at midnight / Don’t get in a fist fight / That pretty face can’t be replaced’. Personal favourite part of the performance is the dance number where the lights switch off and everyone has surprise neon lights on their clothing. Please, no more skiddy-beep-bop-doo’s. 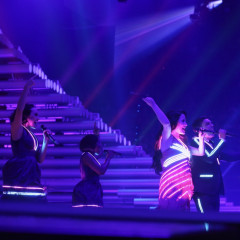 This will make you cringe, from electro-jazz to Andrew Lloyd Webber – here’s our top 5 most bonkers UK Eurovision entries