Winston Churchill once said to ‘never let a good crisis go to waste’ and this has rung true. Lauren Johnson and Dheeraj Chutani take a look at how crises are used as windows of opportunity, and put this claim to the test.

Winston Churchill once famously said, during WW2, “never let a good crisis go to waste.” This adage is one that has (unfortunately) aged well and is incredibly pertinent even today; 9/11, Covid-19, and now even Ukraine, are all used as opportunities by political agents. These crises offer windows of opportunity to achieve what was previously inconceivable. This can be a positive change driven by the humanity that emerges in response to crises, such as the one-hundred million pounds pledged to help the citizens of Ukraine by Britain. Yet, it can just as easily be a negative where crisis distracts governmental sleights of hand – Priti Patel for instance had tried to silently ratify the contentious Nationality & Borders Bill. Lauren and Dheeraj in this piece explore a number of historical cases where this occurred, namely the aforementioned governmental responses around the world to the crises of 9/11, Covid-19, and Ukraine.

Churchill’s adage is a perennial one within the fields of both history and political science. Indeed, time and time again it appears that crises are used as vectors to enact change(s) – politically, socially and even economically. This simply can’t be put down to “coincidence,” and has therefore become the subject of study in these aforementioned academic sectors. This is evident in multiple case studies including those mentioned above.

9/11 is perhaps the most infamous example of a crisis being harnessed by government. President Bush, having been emboldened by a surge in approval ratings following 9/11, was able to pursue foreign and domestic policies that previously were unthinkable.

The Afghanistan War (2001) was the beginning and touted as being ‘counter-terrorism’, Bush vowed to "close immediately and permanently every terrorist training camp in Afghanistan", and in doing so potrayed the country as a safe haven for the terrorist Taliban. Yet he did not stop there and introduced increasingly contentious measures such as Guantanamo Bay, an off-shore ‘detention camp’ for often innocent suspected “terrorists.” As if this wasn’t enough, there were investigations such as The Fay-Jones Report (2004), which found torture had become homogenised at the site and akin to  'company policy.'

The zenith of these controversial policies, however, was no doubt The Iraq War (2003). Bush’s administration suggested that the nation possessed weapons of mass destruction, but it would later transpire that they did not represent either a short or long term threat, and were found to have no possession of such weapons. Iraq, therefore, represented a turning point for the administration but arguably far too late, as by this point the traditional lines in the sand of a constrained presidential branch had become so blurred that it seemed "... that subsequent rebalancing would prove near impossible."

Bush had harnessed 9/11 to promote what would no doubt be an unpopular foreign policy. The way in which he had done so was by using political capital he had acquired after 9/11 to accentuate a phenomenon that political scientists refer to as the 'security dilemma.' Bush oversold the capability of terrorist cells to mount another offensive attack like 9/11, making it seem only rational to mount various counter-measures including the Iraq War. Any expert worth their salt will explain this certainly was not the case previous to 9/11, because the presidential branch was far too constrained by checks and balances to try. This illustrates the way in which crises can be used in a negative fashion by government - President Bush in this case used it to expand his powers as president and to initiate the ‘War On Terror’.

You should not for one moment, however, believe this phenomenon is unique to America. Prime minister Boris Johnson’s government acted similarly in its response to Covid-19. The administration often lent on being ‘guided by the science’ to maintain a safe distance. The PM was close enough to the issue to take credit while being far enough to shift blame, a hallmark of a process called ‘depoliticisation.’

One of the central tenets of this depoliticisation process was daily government briefings. These were led by the prime minister himself or by a high-ranking official in his place, flanked by two experts, which gave a sense of scientific credence to what was being said. The government took credit for self-proclaimed successes such as the testing programme, whilst reducing their failures to being a necessary sacrifice as part of their larger approach. This placed the burden of responsibility one step away from the government themselves, and onto other actors such as SAGE (Scientific Advisory Group For Emergencies). Thus, depoliticisation and the leeway that was already afforded to them by the pandemic enabled the government to escape much of the criticism they would have otherwise bore.

Johnson used Covid-19 and being ‘guided by science’ to justify his desired approach, such as avoiding another lockdown which would be socially and economically devastating. The process of depoliticisation allowed him to do so but maintain a safe distance from it. Should this risk pay off then he can take credit but if not he can just pass on accountability. Covid is just one example in a long list of depoliticisation examples by the Conservatives; The Office For Budgetary Responsibility and The Olympic Delivery Authority being others, but is perhaps the single best example of how the government has navigated such crises.

Johnson has also been known to use international crises to diffuse controversies that plague the administration. Since Russia’s annex of Ukraine, the prime minister's approval ratings benefited; approval rose from 35% to 39% (+4%) and disapproval dropped from 65% to 61% (-4%), as of March 30. This couldn’t have come at a better time for the incumbent prime minister, whose approval ratings had been plummeting as a consequence of 'Partygate.' This is important given the whispers of a plot to oust the prime minister by his own party. Poor ratings could potentially jeopardise the seats of already disgruntled backbenchers, and that's important as "... if the Tory party is anything, it’s ruthlessly focused on winning elections." This should not come as a surprise, however, according to the ‘rally ‘round the flag’ effect, which shows how short-term support for leaders is bolstered during times of crises.

Ukraine not only distracts from the blunders in leadership but also the cost of living crisis. George Eaton of The New Statesman reported the war has seemingly “provided the government with an apparent excuse for the approaching living standards catastrophe.” Martin ‘The Money Saving Expert’ Lewis has in a similar vein expressed his concern with Johnson’s government’s hiding behind the crisis in an appearance on BBC Radio 4’s ‘Today.’

“I am slightly worried that we are seeing what may be potentially a deliberate narrative shift that effectively says the entire cost of living crisis is due to Ukraine and therefore we all need to make sacrifices.” Lewis said. "And that is not correct. What has happened in Ukraine has exacerbated the situation, but the rises in energy, heating oil, water, Council Tax, broadband and mobiles, food, National Insurance were all in place before Ukraine.”

Ukraine, like the various crises before it, is something of a double-edged sword. Yes, it can certainly act as a “smokescreen” for the likes of Johnson and Nicola Sturgeon. Yet, it can equally expose the shortcomings within these leaders’ policies just as easily. Johnson for instance is accused of having an incoherent immigration policy for Ukrainians. Whilst the government has pledged humanitarian aid and recently even military packages, they have only processed approximately 300 of 8,900 (3%) Ukrainian visa applications. Priti Patel’s Nationality & Borders Bill has not appeared to help with these optics either, having attracted widespread public condemnation and defeat in The House Of Lords. Nonetheless, one of the main tenants of the policy has ratified with the government declaring it's intention to deport certain asylum seekers to Rwanda, a move which has attracted criticism from across the political spectrum.

Wisdom often suggests that history is destined to repeat itself if one does not learn from it. This begs the question then of what we can learn from 9/11, COVID-19 and now Ukraine? The field of political science warns us of the dangers of political actors harnessing crises, through concepts like 'The Unitary Executive Model' or 'Prime Ministerial Predominance', where actors have been proven to use crises as an opportunity to forego political accountability. Whilst the three aforementioned examples certainly do call for a degree of expediency in policy making, one mistake which keeps being made is that this is often at the expense of accountability. The pre-existing system(s) of checks and balances are consequently weakened, and restoring them after the crisis is over is a task which appears to be nigh on impossible.

Ukraine shows signs of promise in that the government seems to be held responsible. The Nationality & Borders Bill, and the rate at which visa applications are being processed, are being called into question and checked by mechanisms such as the House Of Lords. A key indicator as to the success of this accountability will be politician’s approval ratings moving forward, and as a spectator it is well worth keeping an eye on. Churchill’s adage may have historically been proven correct but that does not mean that Ukraine and other crises need to go the same way, sometimes it’s best to let the crisis go to waste.

This piece was worked on collaboratively by Lauren Johnson and Dheeraj Chutani. Click the links to visit their profiles and read more of their work. 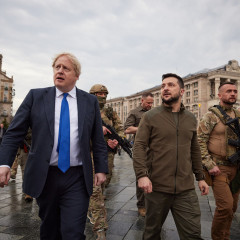 ‘Never let a good crisis go to waste’: A look at crises & change

Winston Churchill once said to ‘never let a good crisis go to waste’ and this has rung true. Lauren Johnson and Dheeraj Chutani take a look at how crises are used as windows of opportunity, and put this claim to the test.