The Coen brothers have made 19 films since kicking off their directing careers with Blood Simple in 1984 – join us as we look back at their films and rank them from worst to best.

The Coen brothers are some of the most acclaimed directors working today, having released 19 films since 1984 (18 of them together, and one Joel Coen solo effort, The Tragedy of Macbeth, which came out last year). What might be most impressive about them is that despite their long careers, they haven’t released a single truly bad film – a couple of mild disappointments, perhaps, but nothing that stands out as a significant drop in quality to their usual standard. Without further ado, here is our ranking…

This 1998 comedy film has become one of the biggest cult classics ever made since its release. You’ve probably seen references to it all over the internet before, knowingly or not – it’s endlessly quotable and the Coen brothers’ trademark style of humour that is present even in their darkest films translates so well into an all-out comedy. Especially one about nihilists.

Blood Simple was the Coen brothers’ debut back in 1984. It was an independent film, funded by investors that Joel and Ethan Coen got on board after showing them a preemptive dummy trailer, and it was one of the very first films that kickstarted the indie cinema movement of the 80s and 90s, alongside Jim Jarmusch’s Stranger than Paradise. It’s impressive it even got made, it had an incredible influence on the landscape of cinema, and it’s an all-round fantastic film.

8: The Tragedy of Macbeth

The only solo effort in this list, The Tragedy of Macbeth is Joel Coen’s solo directorial debut, and it is a damn good one. The black and white cinematography is some of the most memorable you’ll ever see, and the 4:3 aspect ratio creates an atmosphere that’s as claustrophobic as it is oneiric, which is perfect for an adaptation of Macbeth. The three witches are portrayed brilliantly by Kathryn Hunter, and they feature in some of the most memorable scenes of the past few years.

7: No Country for Old Men

The only film in this list that has won Joel and Ethan the Oscar for both Best Picture and Best Director, No Country for Old Men is a bold and brutal western crime thriller that features an all-time great performance from Javier Bardem. Playing Anton Chigurh won him a slew of awards for best actor, and it was also named the most realistic depiction of a psychopath by a study that a few hundred psychiatrists took part in. No Country for Old Men is quite possibly the Coen brothers’ most acclaimed film, and the fact it is 7th on this list is a testament to their skill as filmmakers.

No respectable Coen brothers list could put Fargo any lower than this. It is a perfect example of what they do best: a tragic story with a lot of dark elements that still manages to be funny without ever being tonally conflicting. Finding that perfect balance between comedy and darkness/tragedy is so much harder than it looks, and Fargo is one of the best examples of it. Genuinely hilarious at times, and so, so sad at others.

Perhaps an uncommon choice for the top five, Burn After Reading is a sorely underrated film that is not talked about enough. Frances McDormand and Brad Pitt as a pair of bumbling gym-crazed morons is one for the history books, George Clooney is hilarious as the paranoid serial adulterer that gets caught up in a bizarre storm of crime, and JK Simmons as the intensely confused CIA supervisor observing them from a distance is the cherry on top. Put them together, and you truly have one of the funniest films of the century, maybe ever. That ending is beyond perfect.

This surreal black comedy psychological thriller won the Palme D’Or at Cannes in 1991, along with Best Director and Best Actor (for Turturro). It feels like one of the most densely layered Coen brothers films, with the increasingly surreal events culminating in an ingenious climax that’ll leave you with more questions than answers. Thanks to the rampant symbolism and allusions to literature, it’s a film you can watch time and time again and always take something new from it – which makes it rather insane that it was written in three weeks while struggling to write Miller’s Crossing. Speaking of…

Miller’s Crossing has never quite received the love and attention it deserves. It gets excellent scores on review aggregators like Rotten Tomatoes, but the praise typically ends at calling it a good or interesting take on the classic gangster film. It is so much more than that. It’s a masterful film and brilliantly vague in a lot of respects. There’s a sense of homoeroticism throughout (that is wonderfully progressive considering the era in which it is set) that is kept bubbling beneath the surface, never quite coming to the forefront, much like many of the characters motivations. We are never exactly sure of what anyone is thinking, especially the protagonist, and it creates a potent sense of melancholy.

2: The Man Who Wasn’t There

When it comes to words left unsaid, one film reigns supreme. The Man Who Wasn’t There is perhaps the most poignant of all of the Coen brothers’ films. Ed Crane is a man so stoic that it could easily be mistaken for apathy, and it often is, even by the viewer. His phlegmatic nature is reflected in the composition of the film: black and white cinematography, minimal mise-en-scène, and a soundtrack consisting largely of Beethoven’s piano sonatas. By the end, you really feel as though you understand the protagonist a whole lot more, and as though he always had a lot more going on under the surface than you gave him credit for. The same is true of the film itself. The Man Who Wasn’t There is a tender, nostalgic story about unspoken secrets, repressed love, and people trying to find their place in the world, and its noir

A brilliant soundtrack, a heartbreaking story, and a flawless performance from Oscar Isaac contribute to the reasoning for this 2013 period black comedy musical drama topping the list. Inspired partly by Dave Van Ronk’s autobiography, it concerns Llewyn Davis, a struggling folk singer in 1961. The setting and themes lend themselves to some gorgeously muted cinematography, and the heartbreaking background to the titular character lends itself to a brilliantly subdued performance from Isaac. There’s a lot of subtlety in this film, but there’s also plenty of overt commentary and themes concerning success, artistic integrity, and depression, and the mix is sublime. In typical Coen brothers fashion, they even manage to have some hilarity mixed in among the melancholy. A little something for everyone. 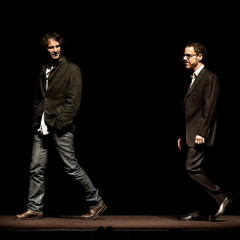 The Coen brothers have made 19 films since kicking off their directing careers with Blood Simple in 1984 – join us as we look back at their films and rank them from worst to best.