An exploration of ten incredible film scores that don’t get the appreciation they deserve.

A film score can be the difference between a good film and a great one. Music heightens emotions, and when used right, it can inspire feelings of awe during moments of spectacle, melancholy during moments of tragedy, or utter shock in the wake of a plot twist. After lengthy and passionate conversation, myself and Trainee Journalist Callum Holt teamed up to curate a list of 10 soundtracks that we think are underappreciated or not talked about enough.

Mishima: A Life in Four Chapters

This 1985 biographical drama is based on the life and work of writer Yukio Mishima. The film splices flashback sequences of Mishima’s lifes that are shown in black and white, colour sequences portraying the final day of Mishima’s life when he attempted to inspire a revolution, and highly stylised recreations of his notable work (including The Temple of the Golden Pavilion). A memorable soundtrack is a must for a movie so vibrant and unique. Thankfully, one of the most influential composers of the 20th century was entrusted with the responsibility of scoring Mishima: Philip Glass. Glass crafted a brilliant, lively score that perfectly complements the film and showers the highly stylised scenes in stirring string compositions performed by the Kronos Quartet. If the film itself doesn’t leave you thinking about it for days, Glass’ score certainly will. A feast for the senses.

A film crafted with such eloquence and hard work could only have been topped off with the most masterful of scores. Loving Vincent took six years and 125 artists to create, with over 65,000 oil paintings being produced as frames for the film, and so the musical accompaniment was crucial to the consolidation of the project. I am confident that there could have been nobody better for this than Clint Mansell; his efficacy for creating music that perfectly encapsulates a moment is unmatched, creating tension and ease wherever applicable. To soundtrack such a beautiful film and harrowing story in the way that Mansell was able to for Loving Vincent is nothing short of incredible, as the soundtracks fully envelops you in the plot and atmosphere of every scene.

In the Mood for Love

The most prominent piece of music featured in In the Mood for Love is Yumeji’s Theme, which was originally featured in the 1991 film Yumeji. Since Wong Kar-wai used it for his sensual romance In the Mood for Love, however, it has rarely been associated with anything else, and it’s not hard to understand why. The luscious yet melancholy romantic drama centres around a man and a woman, both in crumbling marriages, slowly falling in love with each other. The themes touch on forbidden romance, regret, time, and secrets, with the two main characters developing feelings for each other that they are unable to act on. Yumeji’s Theme feels like the rare piece of music that encapsulates perfectly the themes of the film it is used in while simultaneously arousing the exact emotions within the audience that the characters are experiencing. The violin melody is utterly gorgeous and somehow haunting at the same time, invoking the same sense of regret and longing that pervades the film.

The conception of 1989 documentary film For All Mankind saw the birth of one of the greatest ambient soundtrack albums around to date. Brian Eno is truly the master of his craft, and Apollo has seen huge success since its release, featuring tracks in a whole host of other films, such as Trainspotting and The Lovely Bones. The versatility in the music and the atmosphere it produces really lends itself to the nature of the film, with footage from Apollo missions 7 through 17 depicting the otherworldly experience of travelling into space. The score has since become so iconic that the sounds we hear throughout the documentary are those that are synonymous within societal perception of space and lunar travel, as the welling, roaring, and ticking of the ambient electronica has embedded itself into the public subconscious. An Ending (Ascent) is still to this day one of the most popular ambient tracks there is, proving the absolute genius of Brian Eno, and the harmonious match between the score and the film itself.

The Assassination of Jesse James by the Coward Robert Ford

Nick Cave and Warren Ellis are a duo that need no introduction. In case you’re out of the loop, though, they are members of the Australian rock band Nick Cave and the Bad Seeds, and the work they’ve done together has won them heaps of acclaim. The Assassination of Jesse James by the Coward Robert Ford was their second time scoring a film together, and the result is an exquisite soundtrack that perfectly complements the melancholy themes of the film. It’s also one you can easily enjoy long after the film has finished.

A Divorce Before Marriage

This sombre documentary tells of the journey of a Leeds-based, post-rock band I Like Trains, and how the band had to adapt following the collapse of their record label. The soundtrack, composed by the band themselves, highlights the vulnerabilities faced by the circumstances in a really raw and compassionate way. Heartfelt moments, such as those spent between father and son, were really elevated by the soft and intimate instrumentals, whereas the lower moments are really conveyed in the sadness of the accompanying tracks. A Divorce Before Marriage is the perfect example of what a soundtrack should provide – excellent timing, enhancement executed with subtlety, and a really personal, affectionate input from those in the composer’s chair.

The soundtrack for the 2021 musical Annette was done by one of the quirkiest and most underrated bands of the last few decades: Sparks. The group – composed of brothers Ron and Russell Mael – also wrote the story, so it makes a lot of sense that the soundtrack suits it so well. While not every song is something you’ll find yourself listening to in your spare time (it is a musical after all, and almost every line of dialogue is sung), you are sure to fall in love with the songs that you do find yourself returning to once the film is over. You’re sure to fall in love with the film itself, too, and that’s largely thanks to the wonderfully catchy and quirky music. It starts on a magnificent note with “So May We Start,” (which was shortlisted but not nominated for the Best Original Song Oscar) where the cast and crew sing about beginning the film, and from then until the end credits there is never a dull moment. Sparks’ work on this soundtrack won them the César Award for Best Original Music.

Before the Flood is an interesting collaboration between the likes of Fisher Stevens, Martin Scorsese, Leonardo DiCaprio, and many more. The documentary explores the global impacts of our changing climate, what those in power are doing or could be doing to combat climate change, and the denial of its catastrophic effects. The score is a phenomenal team effort from Trent Reznor (of Nine Inch Nails), Atticus Ross, Mogwai and Gustavo Santaolalla. The breadth of the careers of each involved musician lead to a really calculated and articulate soundtrack that really hammers home the points made by the documentary. The compositions strike a healthy balance between total unease and calm, consistently remaining parallel to the themes of the film. Well-structured and a sturdy score alone, in accompaniment with the stunning yet heartbreaking visuals, the reality of climate change really sets in as the documentary plays out.

Moonlight is most commonly known for becoming the winner of the 89th Academy Award for Best Picture following an odd controversy. It’s also commonly known for being a brilliant and beautiful coming-of-age story about a gay black man that touches on themes of toxic masculinity, repressed identity, intersectionality, and vulnerability. It is known for its gorgeous cinematography and the colour palette that utilises deep blues and purples. What isn’t talked about enough, however, is Nicholas Britell’s perfect score. Britell has been described as having one foot in the world of hip-hop and another in the world of classical music, and that is evident in the score for Moonlight. He used the chopped and screwed technique that originated in hip hop and applied it to orchestral music, and the result is wondrously tender and moving.

The 2018 remake of 1977 film Suspiria as a film left something to be desired for me. Despite an incredible cast and crew, something just slightly lacked. What makes up for this, though, is the original score by Thom Yorke. In typical fashion, the music combines eerie strings and melancholic piano throughout to build tension, picking up the pace in alignment with the plot. For a film so heavily centred around music and choreography, the score certainly takes centre stage; there are points of such low light and desaturation in the visuals of the film that force the audience to rely heavily on the audio, which I think was a strategic play from all parties involved to enhance the psychological drama that the film so heavily focuses on. There’s a unique modernity to the score that I think flew under the radar, leading to a lack of appreciation for just how intricately composed the score really is. 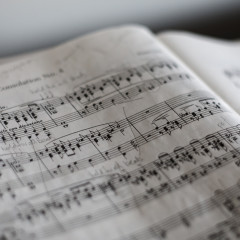 An exploration of ten incredible film scores that don’t get the appreciation they deserve.