Free Covid-19 testing comes to an end, as the number of people testing positive seems to be on the rise.

Ministers confirmed the termination of free covid testing and free parking for NHS staff across England's hospitals, in a written ministerial statement last Tuesday. Commencing 1 April, free testing will only be available to patients admitted to the hospital if deemed entirely necessary to their safekeeping, or citizens living or working in “high-risk settings”.

Ending free Covid-19 testing means people unable to afford the testing are free to walk into public spaces and interact with other members of the public, including the vulnerable, not knowing if they’ve been infected or a risk to the people around them. The situation has been further exacerbated by the crippling rising costs of living in the UK, as millions are said to not be able to afford the test themselves, and retailers have already started competing on prices. Superdrug seems to have the most affordable price on individual lateral flow tests so far starting at £1.99 each but their competitor Boots have started retailing at £2.50 each. Price fluctuations are impossible to predict at this time.

The decision to end free testing is part of the governments’ new Covid-19 response: living with Covid-19. In Prime Minister Boris Johnson’s statement in the House of Commons, he argued that “we can rely on that sense of responsibility towards one another, providing practical advice in the knowledge that people will follow it to avoid infecting loved ones and others. He also argued that it was time to respond to Covid in the same way we’ve responded to other infectious diseases such as the flu. The government had arrived at this conclusion after supposedly evaluating the effects of the omicron variants and stated that they have proven to be “less severe”.

The Office for National Statistics survey, released at the beginning of March, revealed that approximately 2 million people in England contracted Covid, and over 1600 people were admitted to hospitals in Scotland for the same reason (breaking the previous record of 1571 patients) – all within the first week of March. The report also highlights “the percentage of infections compatible with the Omicron BA.2 variant increased in England, Wales, and Scotland,” indicating that this variant’s wave is far from over in the UK. Scotland is also set to end free testing by mid-April and Wales not much later in June.

Many have protested this decision, including Labour leader Sir Keir Starmer who called it a “mistake”, and reinforcing his belief that “Covid isn’t going away”. Agreeing with Keir on this front are multiple scientists and public health officials who have condemned Britain's attitudes towards the new omicron variant as they remark that “living with covid does not mean ignoring Covid.” 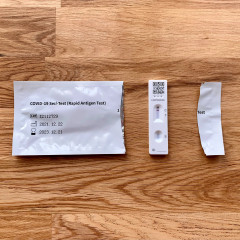 Free Covid-19 testing comes to an end, as the number of people testing positive seems to be on the rise.