BBC drama Then Barbara Met Alan documents the 1995 disability rights movement but how much has society progressed?

BBC Two's drama titled When Barbara Met Alan starring Ruth Madeley aired on Sunday night, exploring the disability rights movement in the ‘90s. The show instilled a sense of pride throughout the disabled community with its raw and honest depiction of the fight for disability equality, but how have things really progressed since then?

From handcuffing themselves to busses to taking down the telethon (a charity night that used disability as a cash grab), Direct Action Network encouraged disabled people all over the UK to fight for their rights, which now means wheelchair users can access public transport and disabled people are protected from discrimination by law.

Since then things have moved on. In 2010 The Equality Act was passed, combining the rights of other minority groups into one piece of legislation. The act states that disabled people should not be discriminated against in settings such as education, services and transport.

In the show, we saw how a young woman was forced to have her wheelchair carried up a flight of stairs every day in order to access her home after she became disabled through injury. These days, there are systems in place to (largely) prevent this from happening, and although it certainly hasn't eradicated the accessible housing crisis we have in the country, it's given disabled people a better chance at getting a property that suits their needs.

These days disabled people have a much wider framework of protection than they did in the 90s, but that doesn't mean there isn't still an awful lot of work to be done. I'm certain any disabled person who fought for rights in the 90s would say the same. Whilst wheelchair users can access public transport, we must remember that only 90 tube stations in London have wheelchair access, and only 20 hotels in the whole of the UK have ceiling track hoists in their accessible rooms.

That's only a small fraction of the discrimination disabled people still face daily. From the employment gap to lack of BSL interpreters in hospitals, there's so much more work that needs to be done to achieve true equality.

Having said all of that, Then Barbara Met Alan was a huge achievement both in the storyline and in the fact that lots of disabled people worked in front and behind the camera.

To the real Barabara and Alan, alongside all the others who fought for disability rights in the 90s, I say thank you. 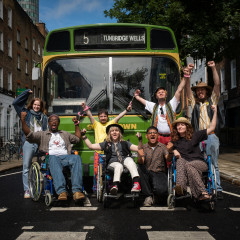 Then Barbara Met Alan: How much have disability rights really changed?

BBC drama Then Barbara Met Alan documents the 1995 disability rights movement but how much has society progressed?